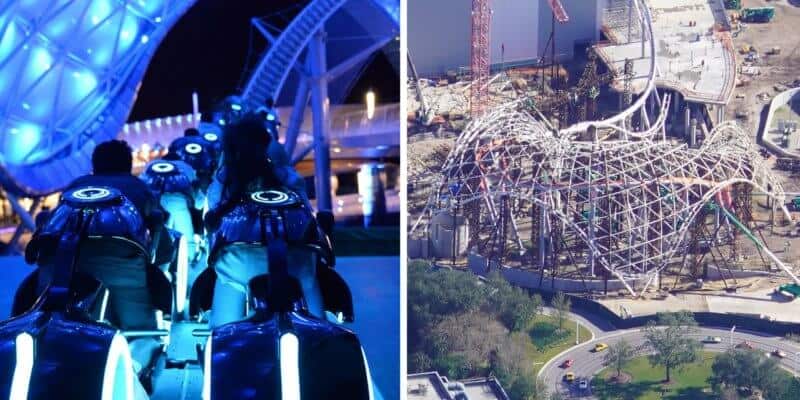 Disney World has many exciting attractions currently under construction that Guests cannot wait to hop on, one major one being TRON Lightcycle / Run. Although we currently do not know an opening day for the new Magic Kingdom attraction, many are hoping that it will be ready in 2021 for the 50th-anniversary celebrations.

Lately, construction seems to be ramping up on TRON Lightcycle / Run, as the canopy has been quickly nearing completion. Previously, we reported that the canopy looked to be almost complete and now it seems we are much closer to that goal. The TRON coaster will have a canopy that lights up and covers the coaster track, truly giving its riders the light cycle experience as the jet by.

Thanks to bioreconstruct, we can see that the canopy is now covering the coaster track.

Aerial look at the canopy construction at Tron. This white free-flowing frame will be self-supporting. Brown temporary supports can be seen underneath.

Aerial look at the canopy construction at Tron. This white free-flowing frame will be self-supporting. Brown temporary supports can be seen underneath. pic.twitter.com/UFTGOy15m9

At the moment, the canopy is being held up by brown beams. However, once complete, the canopy will stand without any beams which will surely create an amazing architectural structure — especially when it lights up at night.

The canopy will have a few more construction updates that will need to occur before it is fully complete, but this is the most covered we have seen the TRON coaster since work first began on the new Tomorrowland attraction. As we know from the Shanghai Disneyland version of the ride, the canopy lights will change color as we race through on our motor-bike adventure from the indoor and outdoor sections of the attraction.

If you want to see what we are in for once TRON Lightcycle / Run is ready for us to “run” on, check out our full Tron Lightcycle Power Run full POV below from Shanghai Disney Resort. Just from this video alone, Guests can see how much the lit up canopy boosts the rider experience, as well as how it caters to the overall TRON theme. In this writer’s opinion, this is definitely an attraction that Disney fans will want to ride at night.

Are you most excited for TRON Lightcycle / Run to open at Disney World? Or do you want to hop on a different attraction?