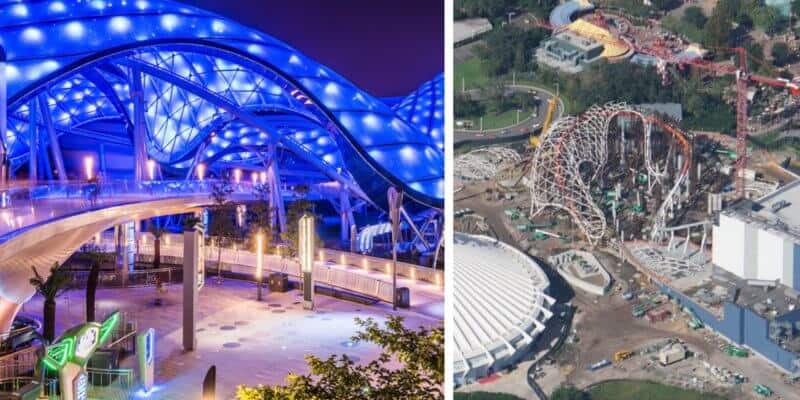 It’s pretty safe to say that almost every Disney fan cannot wait to ride TRON Lightcycle Power Run at Magic Kingdom for what we hope will be a 2021 debut for the Walt Disney 50th Anniversary. Although we are awaiting an official date, the progress on the canopy of this coaster is looking very promising.

TRON Lightcycle Power Run will be the newest coaster at Magic Kingdom, however, it is being brought over from Shanghai Disneyland in terms of concept design. From what we see in Shanghai Disneyland, the canopy on the coaster plays a huge part in both the Guest immersion while riding the coaster but also becomes an eyepiece for the park, looking like lit up artwork.

Kahaner Research (@Tracyak) took to Twitter to showcase the Tron coaster update, and the canopy structure is really taking form. The canopy is meant to have a curvy figure, which we can see below is over halfway complete.

We can also see a view of the coaster from the Astro Orbiter, and we can see that it is beginning to cover the majority of the outdoor track. Canopy pieces began going up in September, so in a mere couple of months, it is exciting to see over half of it complete. If this speed keeps up, we could be looking at a completed canopy by 2021.

Tron Coaster progress as seen from the Astro Orbiter from WaltDisneyWorld

If you want to see what we are in for once Tron is ready for us to ‘run’ on, check out our full Tron Lightcycle Power Run full POV below from Shanghai Disney. Just from this video alone, Guests can see how much the lit up canopy boosts the rider experience, as well as how it caters to the overall Tron theme. In this writer’s opinion, this is definitely an attraction that Disney fans will want to ride at night.

Are you excited to ride TRON Lightcycle Power Run?

Comments Off on TRON Canopy Is Nearing Completion At Magic Kingdom