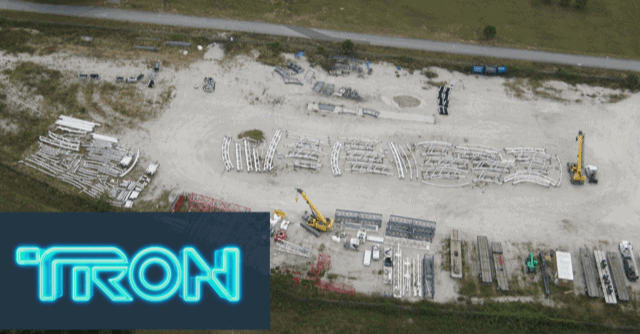 Now, with construction moving full speed ahead towards the Walt Disney World 50th anniversary, Guests can now see the structure of the coaster really begin to take shape. One of the most recognizable features to the TRON attraction, is the glowing canopy that surrounds the coaster.

Just this September, Walt Disney Imagineers announced the installation of the first piece of the canopy- also known as the Upload Conduit.

I’m excited to share these images of the very first canopy piece being installed at TRON Lightcycle / Run in Magic Kingdom this morning! This is one of nearly 40 pieces that will create a dramatic “curved wave” canopy, known as the Upload Conduit, which will flow organically over Guests as they race underneath on their Lightcycles. I’m proud of all the work our Imagineers have put into this @WaltDisneyWorld attraction so far, and the exciting work ahead to bring the Grid to life in Tomorrowland! Continue to follow us here for more progress. #Imagineering #MagicKingdom

Altogether, the Upload Conduit will consist of 40 major pieces that will be a beacon of brightly colored lights in Tomorrowland.

Now, thanks to @bioreconstruct on Twitter, we have an aerial view of the TRON attraction’s canopy being staged before installation. The post reads:

Aerial look at some of the Tron canopy staged south of Animal Kingdom.

Aerial look at some of the Tron canopy staged south of Animal Kingdom. pic.twitter.com/QzTciP6Pec

With the placement of the wave canopy, Walt Disney Imagineers have to be very cautious to not do any damage to the track. So, for now, the TRON Lightcycle Power Run coaster track is being covered to prevent damage.

Must of the of outdoor Tron roller coaster track is covered to prevent damage while the canopy is raised. pic.twitter.com/pJnqqgLs2D

Although, there has been no official opening date for the TRON coaster, Guests are hopeful to experience this thrilling journey to The Grid in 2021! Us here at ITM will be sure to keep you updated on any new developments when it comes to the TRON attraction’s construction.

Are you excited to ride the TRON roller coaster when it opens? Let us know in the comments!

Looking to plan a trip to any of Walt Disney World’s four theme parks — Magic Kingdom, EPCOT, Disney’s Hollywood Studios, or Disney’s Animal Kingdom? — contact the expert team at Academy Travel for help with every detail of your magical vacation at no extra cost!

Comments Off on PHOTOS: The TRON Canopy Almost Completed at WDW!