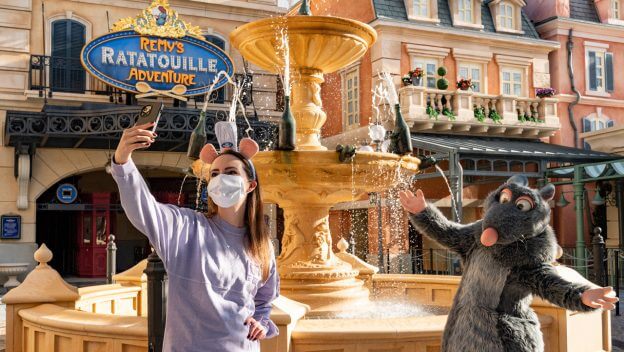 It seems as if we are getting closer and closer to getting an opening date for Remy’s Ratatouille Adventure at the France Pavillion in EPCOT. Disney just surprised one superfan with a chance to meet Remy outside of his brand new attraction!

This wasn’t just any superfan. This is Emily Jacobsen, who is responsible for writing the TikTok Ratatouille the Musical song. In case you missed it, fans of the Pixar movie Ratatouille got together to make an online Ratatouille musical that actually garnered attention from Broadway stars. This fan-made parody musical exploded online and you can read more about that here!

Disney gave Emily more than just a meet and greet. They also took her inside the Remy’s Ratatouille Adventure attraction! You can read more about Emily’s visit here.

We are so excited to see that Remy made special appearance in front of his attraction. While Disney has not given any official word regarding whether or not Remy will make a regular appearance at the France Pavillion once the attraction and new courtyard open, this is a very good sign for fans! Until Disney issues a statement regarding character appearances, we will not know for sure if we can expect to see Remy on a regular basis, but we would love to meet him and ask him if he has any other favorite recipes to share!

Disney has now given fans plenty of behind the scenes looks at the attraction, but still no word on a grand opening date. As a “priority project,” Remy’s Ratatouille Adventure is still expected to open in time for Walt Disney World Resort’s 50th Anniversary Celebration in 2021 — although we don’t know exactly when the party in the parks will begin.

We will just have to wait and see! But, we are looking forward to this exciting new expansion of EPCOT’s World Showcase, and hopefully more Remy.

Would you like to meet Remy outside of the new Remy’s Ratatouille Adventure attraction? Let us know in the comments!

We can help you book the perfect vacation to Walt Disney World for its 50th Anniversary Celebration, click here for more information!