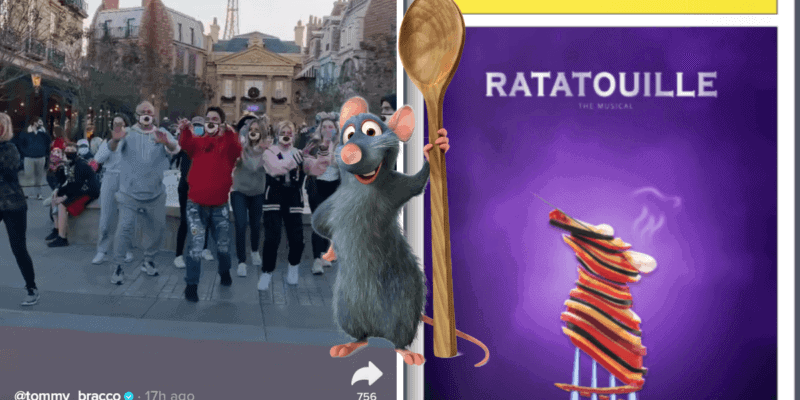 If you have not been following the TikTok saga that is the fake Ratatouille: The Musical, let me fill you in on this Disney deep cut.

Fans who love the Pixar film Ratatouille have been calling for the movie to be turned into a musical. Because of the outpouring of love towards this project, many artists including singers, dancers, composers, and more have teamed-up online to begin making this “fake” musical a reality. It is hilarious and fun to see all the mock auditions for roles in the musical — not to mention the lyrics people have come up with for the songs.

Today, we found a complete dance number that was performed at the France Pavillion in EPCOT, by Tommy Bracco and his family! Bracco is well known for his time performing in the Disney musical The Newsies the Broadway Musical.

Of course, the film Ratatouille is set in France while a rat named Remy chases his dream of becoming a world-renowned chef. That is what makes this dance number absolutely hilarious!

But, the fun does not stop there when it comes to Ratatouille: The Musical. Even Playbill got in on the fun! Previously, we shared that Playbill has made a full-on playbill complete with a song list for the musical!

There is so much more to Ratatouille: The Musical you can deep dive into — just search the hashtag on TikTok!

While we may never seen an actual musical version of Ratatouille on Broadway, you can look forward to the opening of Remy’s Ratatouille Adventure attraction that is coming soon to the France Pavilion in EPCOT.

The attraction is expected to be similar to Ratatouille: The Adventure at Disneyland Paris’s Walt Disney Studios Park and you can look forward to a beautiful new courtyard and expansion of the France Pavilion that will open alongside this attraction.

So what do you think? Should Disney actually make Ratatouille: The Musical? Let us know in the comments!

Comments Off on VIDEO: ‘Ratatouille: The Musical’ Dance Number Performed at EPCOT