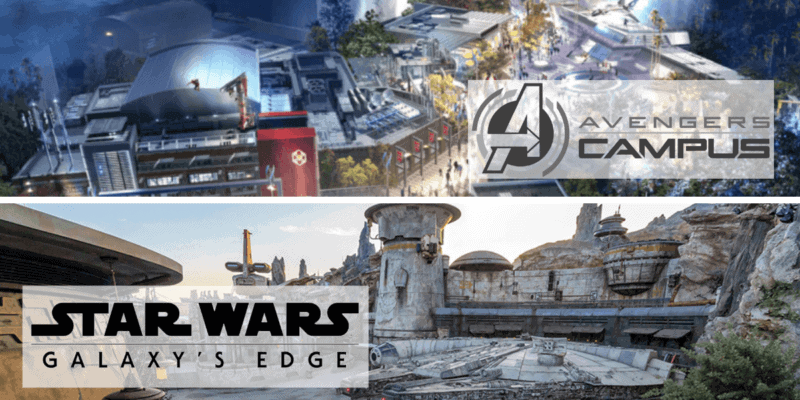 Avengers Campus and Star Wars: Galaxy’s Edge are two of the most highly anticipated lands in Disneyland Resort history. But while Galaxy’s Edge opened long before the pandemic hit, Avengers Campus will tell a different tale. Here, we take a look at the demand for each land and how pandemic-era restrictions will impact how Avengers Campus opens at Disney California Adventure.

Will Avengers Campus Use a Reservation System?

Given the direction that the Disney Parks are moving with boarding groups, virtual queues, and theme park reservations, we wouldn’t be surprised if a reservation or boarding group system was used for Avengers Campus.

In late May 2019, Galaxy’s Edge at Disneyland Park opened with reservation-only access (the land did not open for everyone else — no reservation needed — until nearly four weeks later). With the virtual queue in place, the land quickly hit capacity, and clearly, the reservation system was working pretty well. At the time, however, “boarding parties” were not assigned through the Disneyland app; Guests needed to obtain wristbands in order to actually enter the land for almost a month until Disneyland stopped requiring advanced reservations to get in.

By the time the land’s E-ticket attraction,  Star Wars: Rise of the Resistance, opened in January 2020, the Disneyland app had implemented a new reservation system. Guests were required to log onto the app in the morning and join a Boarding Group to have the chance to ride the new attraction.

Before the parks began their pandemic-related closure in March, we suspected that Disneyland Resort would surely implement a reservation system for Guests wanting to enter Avengers Campus — at least for the first few weeks of the land opening. However, things have changed. Now, we know that the Disney Park Pass reservation system will be a requirement for Guests visiting Disneyland Park and Disney California Adventure Park when the parks reopen with limited capacity. So with a reservation needed to enter DCA, and with DCA already opening with such limited capacity, will Disney require a reservation to enter Avengers Campus, too?

We suspect this is a possibility, though at this time Disney hasn’t announced whether or not this will happen.

Just like when Star Wars: Galaxy’s Edge was gearing up to open, Avengers Campus is highly anticipated. These are some of the most immersive new lands to come to the Disneyland Resort, but given the times we are in, the reception upon reopening Avengers Campus may differ from that of Galaxy’s Edge.

Ahead of the opening of Star Wars: Galaxy’s Edge, the dialogue surrounding the new land very much indicated that Disney was expecting massive popularity. The company consistently stated that they were expecting huge crowds on opening day — and this was said to have discouraged people from visiting. Since the majority of Disneyland Resort visitors are locals and Annual Passholders, there wasn’t a huge rush among fans to visit Star Wars: Galaxy’s Edge when it first opened. It was common for locals and APs to decide that they could visit at a later date, once the crowds lessened — but this resulted in the land seeming less popular than anticipated.

However, we’re in much different times nowadays. In late May 2019, when Galaxy’s Edge opened, there was no indication that the theme parks would be closing anytime soon. Many Guests were able to visit the theme parks before and after the new land made its debut — where was the rush to visit a galaxy far, far away? And, of course, Star Wars: Galaxy’s Edge opened on the day it was originally announced to (and perhaps sooner than many anticipated): May 31, 2019.

But now, with the Disneyland Resort theme parks having been temporarily closed for the majority of 2020, there is a huge demand for magic — not to mention Marvel. Due to unprecedented times and the ongoing pandemic, Disneyland and Disney California Adventure closed in mid-March, and the opening of Avengers Campus — originally announced for July 18, 2020 — was delayed indefinitely. It’s unclear at the moment when the California Disney Parks will reopen or when Avengers Campus will make its grand debut. But when we do get to experience the theme parks of the Disneyland Resort again — and when Avengers Campus finally opens — there will surely be huge demand due.

Something to consider with the opening of Avengers Campus is that it will likely offer an exceptional Guest experience. Since the parks will be required to limit capacity as they reopen amid the ongoing pandemic, Guests will likely get an amazing experience in this new land.

When Disney opens new lands a the theme parks, there is always so much to see, eat, and experience. Chances are, with lower capacity in Disney California Adventure when the park reopens, Guests visiting Avengers Campus may be able to experience everything they are anticipating without such high opening day crowds that would make the experience less enjoyable.

We’re not sure how many people will be allowed into Avengers Campus when the land opens in the future. But we are expecting capacity limitations in one way or another — which would likely allow Guests to meader the new land, take in the sights, and experience life as a super hero-in-training, a dream come true for Marvel fans of all ages.

What do you think of the demand for Galaxy’s Edge vs. Avengers Campus? And how will pandemic-era limitations impact visitation to the new Marvel land? Let us know in the comments!