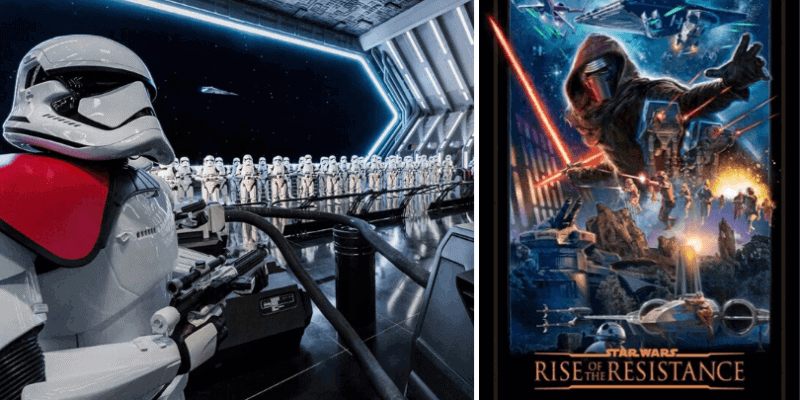 “How the heck can I get the chance to ride Star Wars: Rise of the Resistance?”

This is a question probably asked by many guests, and it’s time we at Inside the Magic took the time to explain what you should expect and share our advice on how to score a seat in a coveted Rise of the Resistance boarding group.

Star Wars: Rise of the Resistance opened today in Star Wars: Galaxy’s Edge at Disneyland. And after going through the process of landing our own boarding pass there and at Walt Disney World resort, it’s time to walk you through it, so you’re prepared for your trip.

You can also watch the experience Inside the Magic’s Emille Crawford had as she secured her boarding group at Disney’s Hollywood Studios in Walt Disney World:

Not necessarily. The virtual queue opens when the park officially opens, and you need to be in the park to join a boarding group. Don’t worry. They will let you through the gate with everybody else waiting to claim their spot.

Therefore, you should make your decision based on how long it will take you to get into the park. For example, Inside the Magic arrived at Disneyland at 7:20 a.m., and made it into the park well before 8. Once 8:00 a.m. comes around, everything was square. The super fans who lined up in the early hours of the day to the stragglers crossing under the train station at 7:55 all have the same chance to get the best boarding group. So, plan accordingly. You might find yourself with a better boarding group AND a better night’s sleep than many of the guests around you.

“If everyone is searching at once, how is the order determined?”

Pure Luck. How fast is your internet connection? How quick were you to open the app when the clock chimed 8? Thousands of people will be vying for a spot in the queue with mere nanoseconds separating each request. Those nanoseconds can make a difference, and it comes off as randomization.

There is no way–yet–for you to pay money to cut the line. There is no way for you to choose which boarding group you want. As the old saying goes, you get what you get, and you can’t have a fit. Be one with the Force, remove all Sith-like desires of the heart, and take your best shot. Also, make sure your Disneyland App (or your MyDisneyExperience App, if you’re at Disney World) is updated to the current version.

Related: Rise of the Resistance Virtual Queue Fills in Minutes as Crowds Descend on Disneyland

“I got stuck with a Backup Boarding Group. Will I really get a chance to ride?”

There’s no guarantee that you will be able to ride the attraction if you are in a backup boarding group.

As Disney explains on the app:

“Boarding groups 82 and above will only be called if all of the initial planned boarding groups have been called back and there is capacity for more riders this evening. Capacity is limited. A boarding group does not guarantee entry to Star Wars: Rise of the Resistance.”

It genuinely comes down to how many people remember to join their boarding group when it’s called, and how smoothly the ride operates throughout the day. Inside the Magic knows of one instance where guests at Disney’s Hollywood Studios secured Backup Boarding Group 96. Their group was called in the middle of the afternoon. So truly it will depend on the day you visit and how quickly Disney is able to move people through the attraction.

So if you get a high boarding group, don’t lose faith. Be excited! There will be plenty of guests who, for one reason or another, couldn’t even secure a backup group.

The best part about the virtual queue? It’s like a FastPass. You can explore the rest of Star Wars: Galaxy’s Edge and all other areas of the theme park, between getting assigned a boarding group and when that group is called. Just be sure to arrive at Rise of the Resistance when your group is called — and have push notifications allowed on your phone so you can be notified as soon as your group is called.

Have you experienced the virtual queue for “Rise of the Resistance”? What advice would you give to people looking to score a boarding group for the first time? Let us know in the comments!