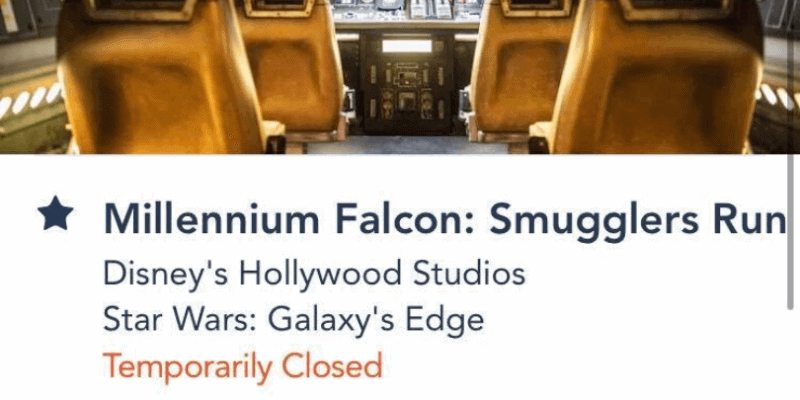 Walt Disney World guests have been evacuated from yet another ride. This time, from Millennium Falcon: Smugglers Run at Disney’s Hollywood Studios. But after an interruption of only 20 minutes, the ride reopened.

This news comes from Twitter, Instagram, and Facebook as guests report the evacuation first hand. It was later confirmed when Disney announced the ride’s temporary closure on the MyDisneyExperience App. 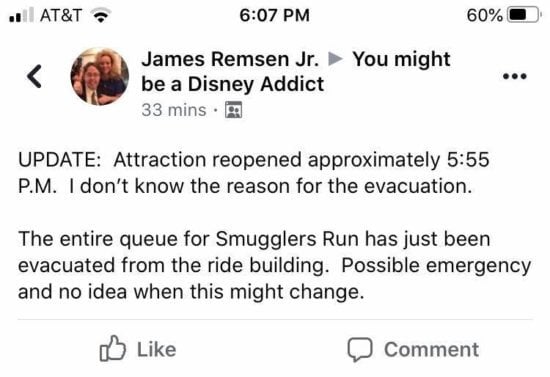 Waited 2 hours in line for the smugglers run at star wars Galaxy's edge and right before getting on, the fire alarm went off and everyone had to evacuate, fuuuuuuuuuu gdi

WE LITERALLY BROKE SMUGGLERS RUN! First, the sound failed halfway through our run, and then this.

Yes, despite the real fire alarms reported, this appears to be a false alarm. After evacuating a line worthy of an 80+ minute wait, the attraction was back up and open to guests. This evacuation appears to be an annoying inconvenience compared to the evacuation on The People Mover at The Magic Kingdom this past week.

Still, it is good to know that there was nothing vitally wrong with Han and Chewie’s precious ship, and nobody was reported to be hurt during the evacuation.

When Star Wars: Galaxy’s Edge debuted in both Walt Disney World and the Disneyland Resort in California, guests could finally live their dream of flying the fabled Millennium Falcon. The ride takes place right in the cockpit of our favorite Correllian freighter with six people to a crew: two pilots, two gunners, and two engineers.

Your crew’s objective is to steal-er-intercept a package. The two pilots fly the ship into position–one controls the Falcon’s altitude while the other steers the ship side-to-side–and the gunners fight off any interfering ships while the engineers fight to keep the ship flying and ensure the cargo is captured. This is one of the key immersive attractions in Star Wars: Galaxy’s Edge, next to Star Wars: Rise of the Resistance.

If you are in the process of planning your family’s trip to the outpost on Batuu, our friends at Academy Travel are standing by to help. Backed with years of experience and award-winning customer service, the agents at Academy Travel are ready to make this trip to “Star Wars: Galaxy’s Edge” or any other land in Walt Disney World, the most magical trip yet.

What do you think happened at Millennium Falcon: Smugglers Run? Did you know anybody that had to be evacuated? Let us know in the comments!