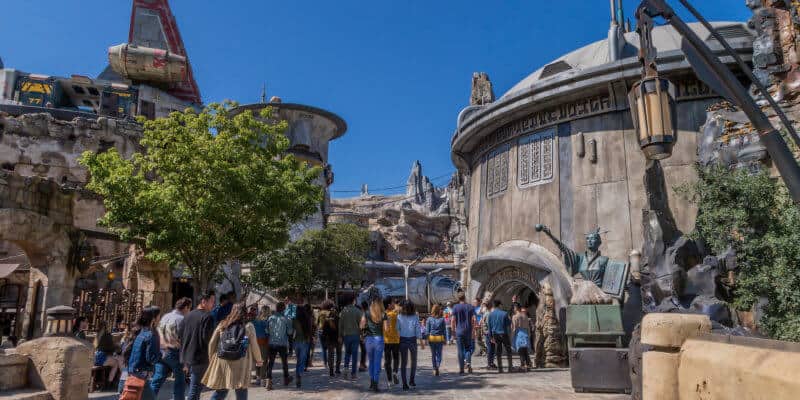 Star Wars: Galaxy’s edge is huge. It’s the largest single-land expansion in Disneyland, and with plenty of merchandise locations, entertainment, characters, and epic experiences, there’s enough to do in Black Spire Outpost to stay for hours and visit over multiple days. But Disney anticipated large crowds with Star Wars: Galaxy’s Edge, and the Imagineers designed a land that is probably the most spacious Disneyland has ever seen. Disneyland locals and long-time visitors know that the park’s walkways and lands are historically much smaller than those at Walt Disney World. The theme park was Walt Disney’s first, and while Disney has attempted to accommodate crowds and amend bottlenecks in certain areas (we’re looking at you, Adventureland), it’s still a pretty small park with fairly narrow walking areas compared to the rest of the Disney Parks in the U.S.

But Star Wars: Galaxy’s Edge isn’t like that at all. And even when the land gets crowded during peak hours in the middle of the day, it’s still not uncomfortable to navigate. Disney has done an exceptional job anticipating and regulating crowd levels, and we can definitely tell that wandering through Black Spire Outpost is an enjoyable experience even on the most crowded summer days, all because of the spaciousness and vastness of the land.

Limitations to how many guests are allowed in the land

During the first few weeks after Star Wars: Galaxy’s Edge opened at Disneyland, reservations were required in order to enter the land. But from June 24 onward, guests won’t need reservations to enter, although there will still be limitations to the number of guests allowed inside the land (as well as inside some of the land’s dining and merchandise locations). To continue providing guests with lower crowds inside the land, Disneyland has implemented a virtual queue service that will be used depending on the occupancy levels at Disneyland park each day. This may not be used on days when the park is at a lower capacity, but on the more crowded days, guests can join boarding groups on the Disneyland app and wait in a virtual queue until they are notified that it is their turn to enter the land. New services like this, as well as reservation requirements for Oga’s Cantina and Savi’s Workshop inside Star Wars: Galaxy’s Edge, are more ways that Disney is doing their part to ease guests’ worries about the crowdedness of the new land.

Low wait times in the rest of the park 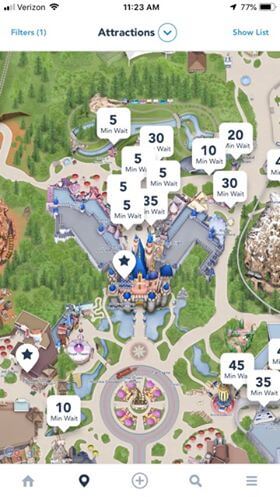 That’s right: wait times have been consistently low in the rest of Disneyland park since the new land opened. Just because Star Wars: Galaxy’s Edge is possibly the most anticipated land opening in Disneyland history, that doesn’t mean Disneyland is too crowded to visit. Actually, it’s quite the opposite. News outlets like the LA Times are even reporting that now is actually the best time to visit Disneyland, and we couldn’t agree more. While the wait times aren’t at an all-time low, they aren’t any higher than your typical, longer summer lines. And aside from E-ticket attractions like Space Mountain and Peter Pan’s Flight, the rest of the park is pretty much a breeze to get through, with the longest queues in the peak times of day like usual. On most days, we’re even seeing shorter than normal queues for attractions like Haunted Mansion and Big Thunder Mountain Railroad. If you’re flexible with the dates you visit Disneyland, check the app and pay attention to the wait times throughout the weekdays when planning your trip. You may be surprised!

So, should you visit Disneyland right now? The answer is always yes, but now could be as good a time as any. No matter what, don’t let your fear of a crowded theme park keep you from visiting the Happiest Place on Earth. It turns out, crowds are probably the least of your worries when planning a Disneyland trip this summer.

Are you planning a Disney trip for the summer? Let us know your travel plans in the comments!

Comments Off on Why we don’t need to worry about Disneyland crowds with Star Wars: Galaxy’s Edge