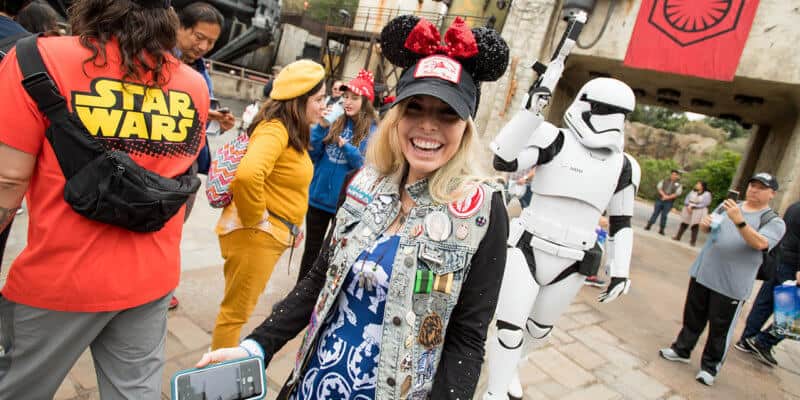 Yesterday was the first day Star Wars: Galaxy’s Edge was open to park guests without reservations at Disneyland and from what we’ve seen on social media, it seems to have been a fairly decent day!

The early morning line for #galaxysedge as we get closer to day one of no reservations. pic.twitter.com/GODATcNJFw

Some of these fans shared that they received these special handouts, which provided guests with pointers of the land, including the pointer that they should be sure to get the Disneyland app on their smartphones to monitor “Star Wars: Galaxy’s Edge Status and Access.”

If the land was listed as “open” on the app, people could journey inside the galaxy far, far away. However, if it was not, guests were given the option of a boarding group, which would notify them through the app when their group was good to be let in. According to Disney, guests who joined in the virtual queue, on average, only waited about an hour and 20 minutes and boarding passes were not required by late afternoon, after which guests could enter at their leisure.

Noted in that image earlier, there was a small crowd outside the park’s gates. However, it wasn’t that bad.

Only about 40 people here! Crazy! I should be asleep! #GalaxysEdge #galaxysedging

Although, as the morning continued, the crowd definitely began to grow.

At least a couple of hundred people already lined up at #Disneyland. How many are here for #GalaxysEdge? pic.twitter.com/WZQBOF9znz

The cantina was fully booked with reservations at 7:30 a.m. The lightsaber building experience sold out before 7:20 a.m. But, later in the morning people were able to sign up for the experience again with times available in the late afternoon and early evening.

Tried out the new #Galaxysedge reservation system for Oga’s Cantina and Savi’s Workshop. Oga’s has availability all day 5 minutes past the opening of reservations, while Savi’s is booked until 3pm already.

17 minutes in, Savi’s workshop is sold out for the day. Guess that beats standing in line

I see everyone mentioning Savi’s was booked 17 mins when reservations were available. But I’m checking now at 7:40am and there are still open reservations for morning, afternoon and evening. The Cantina seems to be gone quick. #GalaxysEdge

From the looks of social media, it seems reservations for the workshop finally filled up a little after 9 a.m.

FYI: Oga’s Cantina & Savi’s Workshop are booked out for the day! #GalaxysEdge #Disneyland

Just checked the app for Savi’s Workshop lightsabers and Oga’s Cantina. Oga’s Reservations are out for the day. There was ONE Lightsaber timeslot available at 7:10pm. If you do not show up for your reservation, your card is charged the full $199.99!!! #GalaxysEdge pic.twitter.com/nuXWehdbRc

By around 8 a.m., guests had made it inside!

In the fastest hunk of junk in the galaxy ?

To the dismay of some, by 8:20 a.m. the land did reach capacity. Guests who weren’t already inside at this point were instructed to join a boarding group and wait for the land to clear out a bit before more guests could enter.

8:20am and land is now at capacity. Virtual queue has begun, and looks like this: pic.twitter.com/xFRiG4l2eJ

At this time, it was also found that the wait time for Millennium Falcon: Smugglers Run was between 3 and 4 hours. This didn’t last long though! Later that morning the wait times decreased pretty dramatically. In fact, some only ended up waiting for about twenty-five minutes.

Millennium Falcon : Smugglers Run wait time is down to a much more comfortable 40 minutes. pic.twitter.com/9jTxEbl6FR

Our actual wait time for #MillenniumFalcon #SmugglersRun was 25 mins, we hopped in line at 9:45. So at least for now, going to say our advice stands, don’t rush into the queue first thing unless you’re in the front of the rope drop crowd #GalaxysEdge #Disneyland

According to Disney, once inside the land, guests waited for an average of 45-60 minutes for Millennium Falcon: Smugglers Run.

Are you excited to experience Star Wars: Galaxy’s Edge without reservations at Disneyland? Let us know in the comments below!