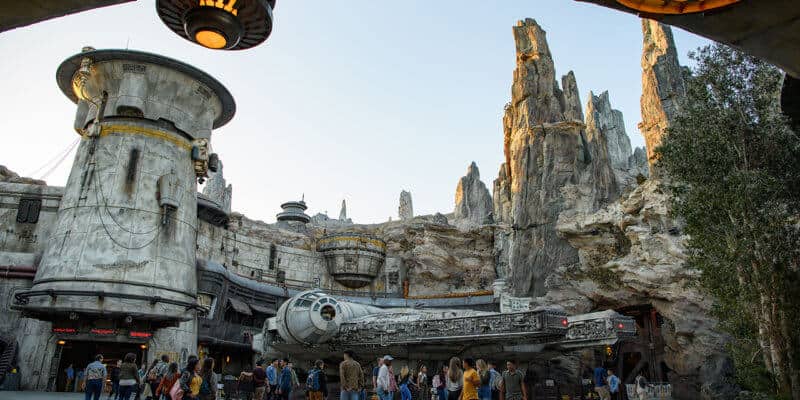 Today was the first day Star Wars: Galaxy’s Edge was opened to park guests at Disneyland without reservations and the land reached crowd capacity within only an hour of opening.

Yes–you read that right. The park was open for only a single hour today before Star Wars: Galaxy’s Edge met capacity and fans were turned away from the intergalactic land.

Guests were added to the new virtual queue and assigned a “boarding party” which provided admission into the park at a later time in the day. The Hollywood Reporter shared that the land’s new attraction, Millennium Flacon: Smugglers Run, met its capacity for walk-ins within the first fifty-minutes of its opening and this was after the attraction was opened 30 minutes earlier than normal at 7:30 a.m.

The ride’s wait time was already at three-hours before Galaxy’s Edge was at its max for guests in the land, according to the official Disneyland app. However, by 10 a.m., it was found that the wait time for the ride went down to 40 minutes.

Inside the Magic spoke to a Disney representative about the crowds on opening day:

“The virtual queue system for Star Wars: Galaxy’s Edge went very well today. As intended, we began issuing boarding passes about an hour after opening, and we turned it off around 4:45 pm, which means guests could walk into the land like any other land after 4:45 pm, without a boarding group. We anticipate that everyone who wants to visit the land today could do so. We are very pleased with how smoothly everything went.

In addition, the land is running very smoothly, with wait times for the Millennium Falcon averaging about an hour and, like we anticipated, it has had that effect on the whole resort, in terms of a great guest experience throughout both parks.” – Disney

But beginning today, the land was opened to all guests who walk to it, if it hasn’t already reached capacity. In the case that it does reach capacity, which is a safe bet for the near future, guests are encouraged to take advantage of the Disneyland app to join the virtual queue.

The virtual queue was designed to give guests an entrance time to the land. However, it is not clear exactly how the time intervals work for the queue or if park-goers will have only a limited time in the land in order to rotate in new guests.

What are your thoughts on Star Wars: Galaxy’s Edge hitting crowd capacity in only an hour of Disneyland being open today? Let us know in the comments below!