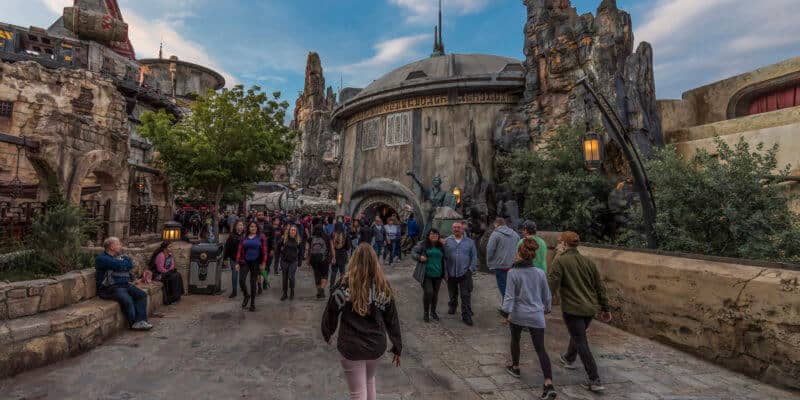 Star Wars: Galaxy’s Edge has been just as wildly popular as expected since it opened last week. But with the largest single-land expansion and the most immersive land in Disneyland Resort history comes some pretty intense lines for its attractions and experiences. Even with reservation-only access and a restricted four-hour visiting window within the first few weeks of opening, Star Wars: Galaxy’s Edge is still facing long wait times for Oga’s Cantina and Savi’s Workshop, two of the land’s most desirable locations.

From the opening day through June 23, guests with reservations to Star Wars: Galaxy’s Edge can access the land during designated times. Up to around 4,000 guests enter the land during each of the five reservation times, and there is some overlap between reservations, which are as follows: 8 a.m. to 12 p.m., 11 a.m. to 3 p.m., 2 p.m. to 4 p.m., 5 p.m. to 9 p.m., and 8 p.m. to midnight. Before guests even set foot in Batuu, they’re already prepared with their own personal lists of must-dos, with generally include doing so much more than riding Millennium Falcon: Smugglers Run. Since Star Wars: Galaxy’s Edge opened, Disneyland’s first-ever bar Oga’s Cantina and the build-your-own lightsaber experience at Savi’s Workshop have been immensely desirable and sought-after, causing the wait times to experience each of these locations to grow as popularity spreads.

To combat these long wait times, Disneyland is offering a solution: virtual queues. Recently, Cast Members at Star Wars: Galaxy’s Edge have begun implementing a text message return system for experiencing Oga’s Cantina. In the new system, in which guests will arrive at the entrance to Oga’s Cantina, provide a Cast Member with their phone number, and then will be free to roam about Black Spire Outpost until they receive a text asking them to return to the cantina’s entrance. Once guests return, they may have to wait in a shorter line of around 20 minutes until they are allowed to enter. The text message return system for Oga’s Cantina allows guests to spend less time waiting in line and more time experiencing the rest of what Star Wars: Galaxy’s Edge has to offer.

“What we’re trying to do is diffuse the long queues so that people don’t feel like that’s how they have to spend their day,” Disneyland vice president Kris Theiler said.

Currently, guests are limited to only 45 minutes inside Oga’s Cantina and a maximum of two drinks per person, but according to a recent report by OC Register, Disneyland hasn’t yet had to enforce the time limit.

Additionally, Savi’s Workshop, the merchandise location where guests can build their own lightsabers for around $200 each, has also been dealing with long wait times since the land’s opening. To mitigate crowds and wait times and provide guests with a more enjoyable experience at Savi’s Workshop, Disneyland has begun issuing color-coded cards that indicate suggested return times. OC Register reports that this system will only be used at select times when the queue is particularly long. At other types, those wanting to build their own lightsaber will have to wait in a standby queue for up to a few hours.

In the future, Disneyland plans to implement a permanent reservation system for Oga’s Cantina and Savi’s Workshop that will be similar to that of Bibbidi Bobbidi Boutique, where guests have to make appointments in advance to receive royally-themed makeovers in Fantasyland.

What do you think of Disneyland’s solution for long wait times in Star Wars: Galaxy’s Edge? Let us know in the comments!