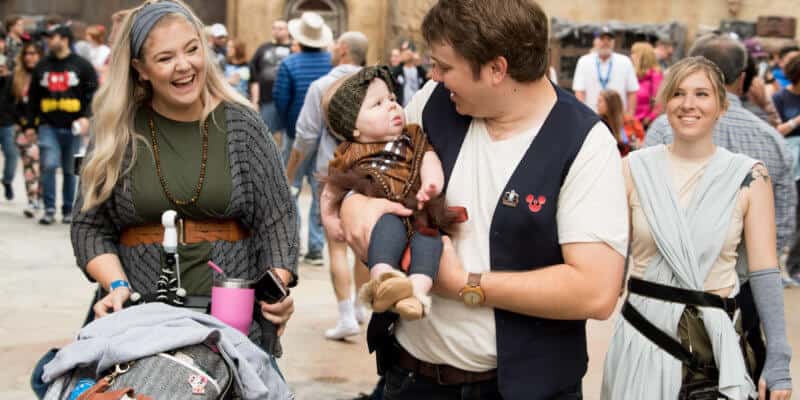 Star Wars: Galaxy’s Edge is one of the most highly-themed and technologically advanced theme park expansions of all time and it’s exciting for guests of all ages. However, before you take your kids to this otherworldly land, be sure to be mindful of these few tips.

Character encounters are for fans of all ages. Although, we know many kids get the most enjoyment out of it! When it comes to character meetings at Star Wars: Galaxy’s Edge, it is a little different than most other areas in the park as they kind of just float around.

Because Galaxy’s edge is a “living land,” guests are meant to encounter the characters organically, similar to how you would in real life. But, it might leave you running around like a chicken with its head cut off looking for them.

Fear not, as Cast Members hold this information of when and where you’ll be most likely to experience these encounters with your favorite character. Just make sure you play along though as they’ll be more likely to tell you if you’re immersing yourself in the experience. Maybe approach the subject like, “Hey, where can I run into my old pal Rey? I have some space junk she might find useful!”

Some characters to look out for in the land include Kylo Ren at the First Order encampment at Docking Bay 9 and Resistance spy Vi Moradi.

Millennium Falcon’s Smugglers Run is one of the two attractions found in the new land. The ride in itself is awesome! However, the attraction also features a lounge area where guests sit and wait prior to hitting the cockpit and it’s theming is out of this world!

The area looks and sounds like a working spaceship and features the table where Han and the rest played Dejarik (a chess-like hologram game). This area is awesome for kids as they can play and interact with the ship and also play the game!

Additionally, the attraction itself isn’t too difficult and is perfect for guests of all ages over the height of 38″. Kids only have to push buttons when they light up to take part in the experience.

Did we mention it’s also a great spot for families to get a picture together in the land!

What kid doesn’t love trying a wacky and unusual food or drink item? Well, the Blue and Green milk is their ticket! The two drinks both feature different flavors and colors and are both allergy friendly as well as they’re not made of actual milk. Insider Tip: mix the 2 flavors for a delicous 3rd flavor.

The milk drinks are plant-based dairy, rice milk, which makes them easier for everyone to enjoy and they’re soft-frozen like a milkshake. The texture is most similar to that of a smoothie!

Both drinks can be found at the Milk stand!

As one can imagine, some of the menu items found at the restaurants in Galaxy’s Edge can seem more suited for adults. But, fear not, as they’re is one restaurant that serves the best kid options for breakfast, lunch, and dinner!

For kids aged 3-9, your best bet is to take them to Docking Bay 7 Food and Cargo. Their offerings are simple and healthy! Here is a look at the full kids menu:

Star Wars: Galaxy’s Edge is so immersive already. However, there is one way to immerse yourself even more in the land and it’s through the Play Disney Parks app.

Some of you might be familiar with the app, which allows you to play interactive games in some of the Disney Parks’ attraction queues. Although, for Galaxy’s Edge Disney has transformed the app to allow guests to interact even more with the themed land.

Some of the features of the app include allowing guests to translate galactic languages (some of which can be found on the outside of buildings all throughout the land), to scan cargo to see what’s inside, tune into secret communications, and hack into devices, control panels and even droids!

When are you taking your kids to Star Wars: Galaxy’s Edge? Let us know in the comments below!

Comments Off on Things to know before taking your kids to Star Wars: Galaxy’s Edge