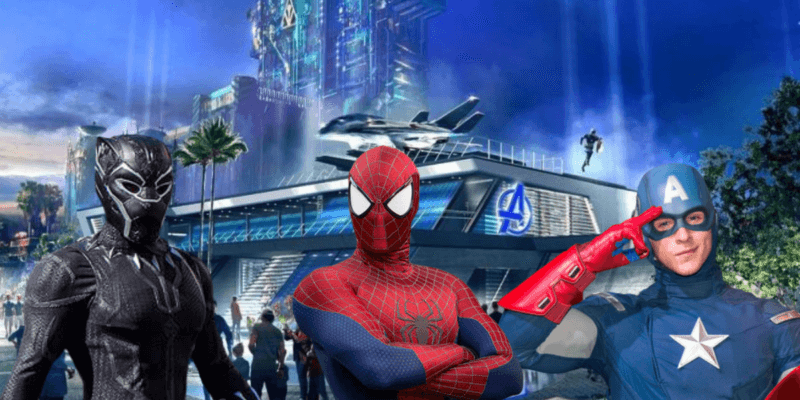 Avengers Campus is perhaps one of the most highly anticipated new lands in Disneyland Resort history. Set to open at Disney California Adventure in the near future, this land boasts new, state-of-the-art experiences and an immersive atmosphere that is sure to impress Marvel fans of all ages (or anyone who appreciates the work of Walt Disney Imagineering).

One of the things we are most excited to experience at this new Marvel-themed land is the heroic encounters with some of the most famous Avengers. Here’s everything we know about which characters we will see at Avengers Campus at DCA.

About Avengers Campus at Disneyland Resort

Avengers Campus is a new land at Disney California Adventure that will be the West Coast headquarters for Marvel heroes. Here, heroes in training will encounter the best of the best and train like Avengers themselves, learning how to sling webs like Spider-Man and even board a Quinjet to save the day.

“Since day one we have been trying to figure out, how do we bring this land to life—and not just bring it to life where you get to see your favorite heroes or you get to meet your favorite heroes, but where you get to become a hero,” says Brent Strong, executive creative director, Walt Disney Imagineering. “And within the story that we’ve created, the idea here is that every time we’ve seen the Avengers go up against bigger and bigger threats—from Loki to Ultron to Thanos—the way that they’ve persevered, the way that they’ve succeeded, is with a bigger and bigger team. So this land is finally the invitation for all of us to join the Avengers—all of us to join the team—and all of us to actually find the hero within, which is just incredibly exciting.”

In this new land, Guests will be able to experience three attractions — including WEB SLINGERS: A Spider-Man Adventure, the already opened Guardians of the Galaxy: Mission BREAKOUT!, and an all-new E-ticket attraction. We will also get to purchase some pretty amazing merchandise (like spider-bots) and dine at Pym Test Kitchen, inspired by Ant-Man and the Wasp. And — aside from the Spider-Man stuntronic that will swing from building to building in the new land — we’re most excited for the character encounters coming soon to Avengers Campus.

“This is going to be the largest assembly of these heroes anyplace, anytime, anywhere. We really have a place for them to live and work and play and protect and train,” said Dan Fields, executive creative director for Disney Parks Live Entertainment, according to D23.

And he’s right. Given everything we know about which Marvel heroes will show up at Avengers Campus, it’s clear that this will be the place where Guests can see the most Avengers. If you’ve loved encountering heroes whenever you visit Disney California Adventure, then this new land will surely impress you even more.

Here is a list of all of the Marvel heroes that have been confirmed for Avengers Campus at DCA:

However, more heroes could join the ones who have already been confirmed. In December, local Southern California news source the OC Register has shared a list of heroes they believe could possibly show up at Avengers Campus in the future:

The new Marvel movies and Disney+ series could bring another three dozen characters to Avengers Campus, including:

Considering that there are almost countless new Marvel shows and films coming soon to Disney+ and movie theaters, we wouldn’t be surprised if Disney continues hiring more actors to portray some of the heroes who are sure to be Guest favorites. Additionally, Marvel Studios boasts a diverse new group of heroes joining the lineup, and there will likely be plenty of fans young and old who would love to see these heroes at the theme parks. With Eternals and Shang-Chi being released in the future, chances are we may see some of thee characters in the parks later on. At this time, however, only the first, shorter list has been confirmed by Disney.

So far, we have two confirmed character experiences — which Disney is calling “Heroic Encounters” — at Avengers Campus. Those are Sanctum (“Explore the ruins of a mysterious ancient sanctum and learn the site’s secrets from Doctor Strange”) and Avengers Headquarters (“Encounter some of Earth’s Mightiest Heroes and watch them spring into action to defend the Avengers command center”). This means that we will be able to see so many of our favorite Marvel heroes all throughout the new land since various locations will provide opportunities to encounter some of the coolest Avengers.

Get Excited: Disney Hypes Up New Avengers Land Ahead of DCA Reopening

Encounter the Master of the Mystic Arts
You and your fellow recruits have been invited to visit the Avengers Campus, meet Doctor Strange and open your eyes to the mysteries of the multiverse. Don’t miss this once-in-infinite-lifetimes chance to learn the secrets of the mystic arts.

You’ll feel like time will stop when you come face to face with Doctor Strange and he demonstrates his mystical abilities. Who knows, someday you may need this knowledge to defend the earth, and our reality, from threats beyond your imagination!

An Ancient Site, Hidden for Centuries
For as long as anyone can remember, rumors of unexplained events and energies have emanated from a remote location in the hills outside Los Angeles.

In the late 1940s, a Stark Industries complex was built on the location. Decades later, Tony Stark invited Doctor Strange to the Avengers Campus to enlighten recruits about the mystic arts. Doctor Strange suspended the area’s cloaking spells and revealed the Sanctum to the world.

Come, discover for yourself what has been hidden for centuries. See the ancient ruins and learn from Doctor Strange about the amazing Orb of Cagliostro.

The Orb is known to be especially active at night. Visit after dark and you might see the Sanctum flowing with magical energy!

The Avengers Stand Ready
The gleaming Quinjet that rests high atop the Avengers Headquarters building is bound to attract attention—maybe even some unwanted attention.

There are reports that the villain known as Taskmaster is plotting a break-in, and the Avengers are on high alert. Brave Super Heroes like Black Widow, Iron Man, Captain America and Captain Marvel greet new recruits and scan the horizon for potential threats.

If Taskmaster and his gang of mercenaries do appear, our heroes are ready to defend the Avengers Headquarters, which would surely lead to an action-packed confrontation on the rooftop and all over the building. You’ll definitely want to be there to see what happens.

Who knows, new recruit, maybe someday you will join the Avengers on their next adventure!

To read all about what’s coming soon to the new Marvel-themed land at Disneyland Resort, visit the official website here.

Want to book a trip to visit Disneyland ASAP so you can experience Avengers Campus at Disney California Adventure? Click here to work with our favorite travel agents at Academy Travel!