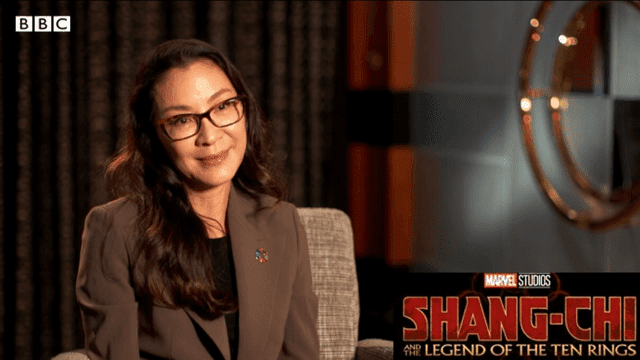 Shang-Chi and the Legend of the Ten Rings recently wrapped filming in San Francisco and it set to debut in the summer of 2021. There is a lot of buzz and plenty of excitement surrounding the film due to it being the first Asian cast for the Marvel Cinematic Universe.

Shang-Chi is already breaking barriers as it will feature Marvel’s first Asian superhero! Simu Liu will lead an all Asian cast for the first time in the Marvel Cinematic Universe.

Now, actress Michelle Yeoh is speaking out on what it is like for Asians to “finally” have a trailblazing film such as Shang-Chi and the Legend of the Ten Rings. Although the Malaysian actress has yet to confirm or identify her role in the Marvel film, she still applauds the studio for the inclusion and representation of the Asian community.

The Crazy Rich Asians actress had this to say in a BBC News interview:

“I am very, very happy that finally we have our own superhero. You have Black Panther, right? You even have the Hulk, Thor, Black Widow. Finally, yes, Shang-Chi.”

In another interview, Yeoh even compared Shang-Chi to Crazy Rich Asians when it comes to representation:

“When Crazy Rich Asians came out, it changed the map. It changed the whole way Asians were represented and seen. We were no longer invisible. We were no longer just a token. We were really represented in a contemporary [way],” she said. “Not just in period pieces or flying across rooftops or something like that, but in a way little girls and little boys look up and go, ‘Oh my god, I can see that’s me up there.’ That is very, very important.”

This is indeed very important. This film seems like it will offer great representation for the Asian community.

It is important to remember that even though the film is slated for a July 9, 2021 theatrical release, due to the ongoing pandemic, this release date could change.

Are you excited for Marvel’s Shang-Chi? Let us know in the comments!