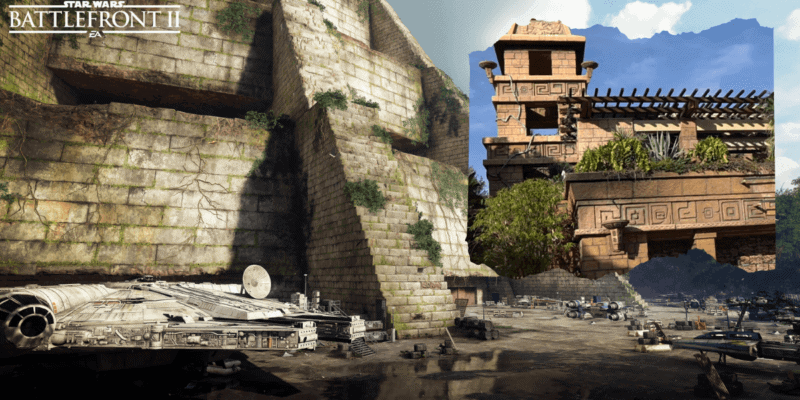 Star Wars has a temporary location at what used to be known as the WonderGround Gallery at Downtown Disney at Disneyland Resort. However, some fans think a more permanent Star Wars store is coming to the Downtown Disney District…and it could take over the former location of the Rainforest Cafe.

Recently, the Asian Street Eats food stand was removed from the area in front of the building that used to house the Rainforest Cafe. There has long been speculation surrounding whether the Rainforest Cafe can come back one day in the future (the restaurant — along with several other locations — closed a few years back ahead of the planned construction for another Disneyland Resort hotel that has since been scrapped). However, YouTuber and Disney reporter David of FreshBaked brings up an interesting theory that was shared by another Disneyland fan:

The Galaxy’s Edge trading post is temporary. It took over the WonderGround Gallery, but it’s not really a suitable place for a Star Wars gift shop”

David notes that one of the interesting parts of this theory that the Star Wars Trading Post could move from its temporary location of the WonderGround Gallery to a more permanent location of the former Rainforest Cafe building is that it slightly resembles the hidden military base of the Rebel Alliance on Yavin IV, as seen in Rogue One: A Star Wars Story. Perhaps Disney could do some renovations on the Rainforest Cafe building to make it look more like this Rebel Alliance outpost and therefore give the Star Wars Trading Post a permanent retail location at the Downtown Disney District.

Here is Frederick Chambers’s (@FreddyFromBatuu) original post about his theory:

Asian Street Eats has been removed and work has begun on rain forest cafe.

Word on the street is that the Galaxy’s Edge Trading Outpost will be moving here at a future date. A Marvel/Avengers Campus shopping experience will be taking over the former Wonderground.

This makes sense, as the rainforest cafe already looks like the rebel base on Yavin 4. Just put a few X-wings out front and it would look fantastic. I believe this store will be a permanent fixture in DTD.

This makes sense, as the rainforest cafe already looks like the rebel base on Yavin 4. Just put a few X-wings out front and it would look fantastic. I believe this store will be a permanent fixture in DTD. pic.twitter.com/o2ttZ8bnCk

Additionally, as fans of both Star Wars and new Disneyland Resort offerings, we speculate that introducing a Rogue One-era Star Wars merchandise location as a retheme of the Rainforest Cafe building could also allow Disney to add character appearances to Downtown Disney. Perhaps Jyn Erso and Cassian Andor can greet Guests from atop an outdoor balcony overlooking the Downtown Disney West End, or maybe a K-2SO (my personal favorite droid) audio-animatronic can interact with fans inside the shop.

Disney could add these Cassian Andor, Jyn Erso, and K-2SO character appearances to Downtown Disney much like they incorporated stormtrooper appearances into Disney Springs at Walt Disney World Resort. The characters could help distribute the crowds of Star Wars fans throughout all of the Disneyland Resort. Plus, given where Star Wars: Galaxy’s Edge is set within the Star Wars timeline, a shop set during the time period of Rogue One would allow Disney to promote the new Andor series on theme park property in a much more cohesive way.

Disney has shared that the current Star Wars Trading Post takeover at the WonderGround Gallery will be around for the foreseeable future, but we think these Disney fans may be onto something with their Rainforest Cafe theory. As Disney continues to promote Star Wars content, merchandise, and experiences both inside and outside of the theme parks and resorts, we wouldn’t be surprised if a more permanent, well-themed Star Wars: Galaxy’s Edge merchandise location was added to the Downtown Disney District. It would certainly bring more people to the West End of Downtown Disney and solve the problem of the currently unoccupied Rainforest Cafe building.

There’s still no word on what will happen with this area of Downtown Disney, but we plan to share more information as Disneyland Resort officially releases it.

You can read more about the current Star Wars takeover at WonderGround Gallery here.

What do you think? Is it possible that Disney is considering a Star Wars retheme to Rainforest Cafe in order to turn it into a merchandise location?