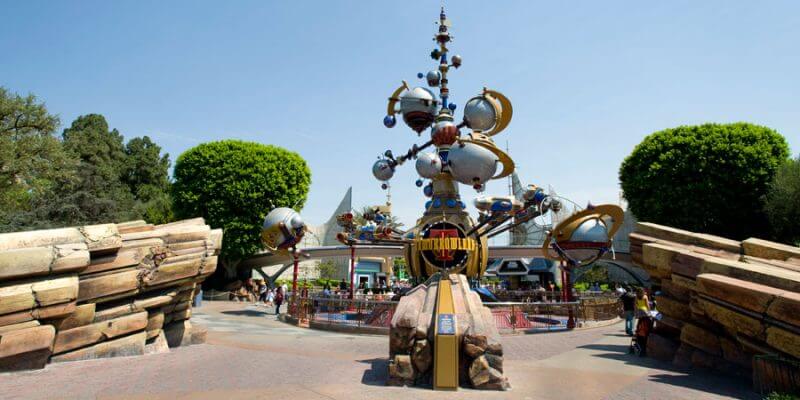 If you’ve always disliked the “French fry rocks” at the entrance of Tomorrowland at Disneyland or you’ve just been waiting for this land to get some updates, this may be your lucky day. Disneyland just revealed the new look for the overhauled Tomorrowland entrance, and it looks like the front of the land is being reimagined back to its retro days.

As part of Project Stardust — a project to improve Guest experience at the Happiest Place on Earth through things like widened pathways, among other renovations — Disney has been working to the lands and areas within Disneyland park to deliver a “world-class Guest experience.” The castle has gotten a new look, we’ve seen a new and improved wider entrance for Adventureland, and now Tomorrowland is the latest area to be getting its Project Stardust treatment.

We’ve noticed the removal of the “French fry rocks” from the entrance of Tomorrowland. Walls have gone up so that workers can work on the entrance of the land, and up until today we haven’t been able to get much of a look at exactly what Disneyland has planned for this iconic area. (Unless of course you’ve been riding Astro Orbiter to get a bird’s eye view of the construction.)

But if you look at the just-released concept art below, you can see the stark differenced between the Tomorrowland entrance of yesterday and the newly reimagined entrance that Disney has planned. Gorgeous landscaping and wider paths will greet Guests as they enter one of the most well-known lands in a Disney park.

“When planning, Imagineers wanted to open up the space and improve access into the land. However, it was important to maintain its overall complexion—with trees and beautiful planters,” Disney described the new entrance in a press release. “As shown in this rendering, guests will soon be entering Tomorrowland on a widened pathway lined with elliptical planters that are filled with swirls of colorful flowers.”

Disney Imagineer Kim Irvine also mentioned something that many Disney fans must have been thinking as soon as they saw they saw the concept art: Hey, that looks a lot like how Tomorrowland used to be! If this is how you feel about the new entrance, you’re not wrong. Imagineers of today were inspired by the Tomorrowland of decades past, a “world on the move” with stunning pops of color and a very futuristic feel.

“Tomorrowland has always represented a feeling of optimism. [Imagineer] John Hench originally designed the land with this notion of being wide open to innovative ideas and technology,” Irvine said. “When we started looking at the different Tomorrowland entrances through the years, both the 1955 and 1967 versions had a very optimistic appeal which resonated with us.”

So far, we don’t have an exact date for when Disneyland plans to unveil the all-new entrance to Tomorrowland. But we’re definitely excited to see it in person as soon as possible.

Disneyland also hasn’t mentioned if or when an overhaul of Tomorrowland will occur. But if they have plans to reimagine other areas of the land — either slightly or drastically — in the near or distant future, we’re definitely eager to learn more.

Planning a visit to Disneyland anytime soon? The Authorized Disney Vacation Planners at Academy Travel can make your trip to the Happiest Place on Earth a very special one! They know all the ins and outs of traveling to Disneyland, Walt Disney World, and other global Disney destinations. And with all of the amazing things that Disneyland Resort has to offer through the rest of 2019 and into 2020, there’s no reason not to book a trip. Click here for a free, no-obligation vacation quote from Academy Travel

What do you think of this Tomorrowland entrance concept art? Let us know in the comments!