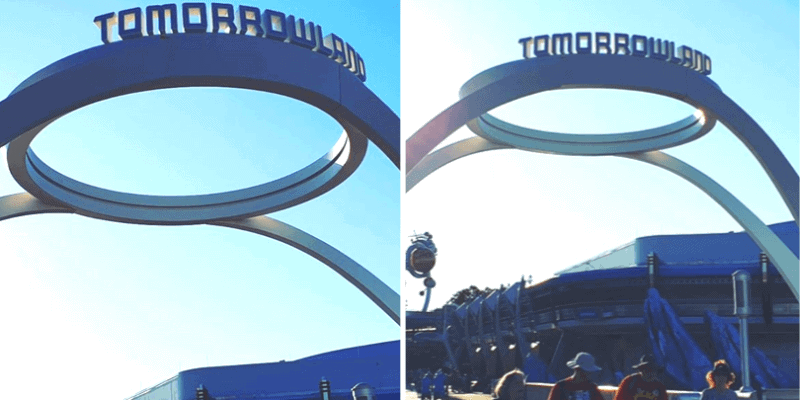 After months of speculation and waiting, Disney has installed an all-new sign above the entrance to Tomorrowland at Walt Disney World’s Magic Kingdom.

The new sign is sleek, modern, and understated. It’s not overtly themed and it doesn’t call much attention to itself at all. Instead, it welcomes guests into the land under its arches, a design that seems to pay homage to its previous incarnation.

And here’s the new sign (images courtesy of Disney fans who have shared the sign to social media):

After visiting Magic Kingdom and seeing the new sign for themselves (or after seeing pictures of the sign shared online), fans quickly took to social media to express their opinions. Some noted that they were happy to see Tomorrowland with an entrance sign after the land went a couple months without one. Others weren’t so thankful. Take a look at what the Disney community is saying:

The new Tomorrowland sign looks ok. People wanted to take pictures of the old sign. I don’t see that happening as much. I’m more concerned of what’s in the land. What’s going into Alien Encounter and when?

As someone who loves Tomorrowland with all her heart the new sign offends my soul?

Us: “Hey Disney World… can we get a new nighttime parade?”

It’s clear that the Walt Disney World community has mixed reviews of the new sign, and we understand that. When you compare the new Tomorrowland entrance sign to the old one, the old one looks much more vibrant and alive, while the new one is much less eye-catching. But as some have pointed out, this new Tomorrowland sign could be prefacing the impending refurbishment of Tomorrowland, something so many Disney fans have been wanting for a while.

Still, we have to admit that no matter how the new sign looks compared to the previous version, we’re happy that Tomorrowland finally has an entrance sign at Magic Kingdom again.

What’s your take on the new Tomorrowland sign at Magic Kingdom: are you a fan of the new design, or do you think the old sign was better? Let us know in the comments!