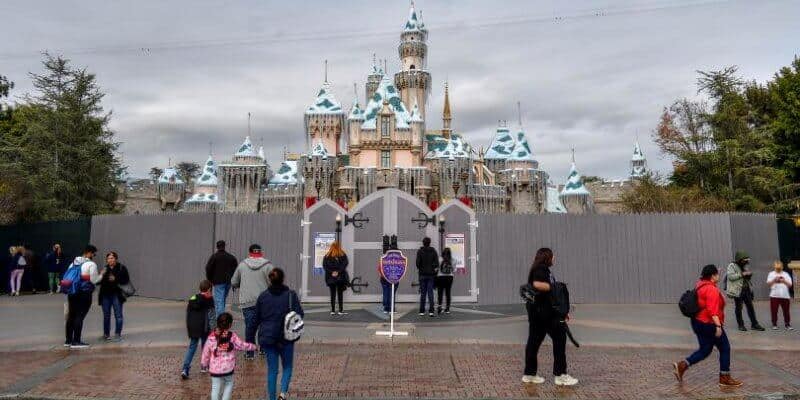 As we previously reported, Sleeping Beauty Castle closed for refurbishment earlier this month, and today, Disney has revealed the reason for this temporary closure is part of a bigger plan that will refresh some of the magic of the historic theme park.

Specifically, as it relates to Sleeping Beauty Castle, in addition to re-roofing it, Disney also plans to repaint its exterior, refreshing the existing color scheme of the cool bluestone, the warm pink plaster walls, and the blue roofs. However, Disney will be adding a “little pixie dust” that Disney Imagineer Kim Irvine says will be “subtle and charming.”

The refurbishment of Sleeping Beauty Castle is only one of the many changes coming to the park, which are all a part of Project Stardust, the name of the number of enhancements coming to the Disneyland Resort, specifically Disneyland Park. According to Disney, this new project’s enhancements will range from the overall beautification of the theme park to maximizing guest comfort and access.

For those of us hesitant to embrace change, fear not! Disney says once Project Stardust is complete, Disneyland park will remain the beloved icon and international treasure it is today while preparing the theme park for its next phase of significant growth, starting with Star Wars: Galaxy’s Edge, where tradition meets a new frontier.

In addition to the refurbishment of Sleeping Beauty castle, Project Stardust has also brought smaller enhancements throughout the park. Some of these include curbs on Main Street, the U.S.A being enhanced with slow inclines, new brickwork, the replacement of the horse-drawn streetcar track, and the reconfiguration of the queues for Matterhorn Bobsleds, “it’s a small world” and Dumbo the Flying Elephant. All of these, are ways the park is trying to improve guest access and comfort.

Other enhancements to come from Project Stardust include the adjustment of the locations of planters and outdoor vending carts to make room for additional walking space and new, more efficient stroller areas. There also will be more seating in Disneyland Park than ever before.

In this new video, Disney Imagineer Kim Irvine talks about the beautification of Sleeping Beauty Castle.

Construction walls have gone up around Disneyland’s Sleeping Beauty Castle as a major refurbishment of Disneyland Park’s most iconic attraction begins in preparation for the grand opening of Star Wars: Galaxy’s Edge in June.

Gray construction walls and green mesh fencing are the only views guests of Disneyland Park will be getting of the iconic castle as its refurbishment begins. According to OC Register, the refurbishment of the castle, which began Monday, January 7, will include a $300,000 reroof of the 70-foot-tall castle that will replace the fiber-reinforced plastic on the turrets.

In addition to views of the front of the castle being obscured, the construction walls also block the moat and drawbridge from guests’ level sight. All that is left for visitors to marvel over is a not-so-magical gate with black iron hardware, which serves as an entrance to the construction site.

Blue fences now block the center and east archways at the rear of the castle. OC Register reports that a decorative scrim will be used to cover scaffolding once it is erected around portions of the castle.

Signs in front of the castle direct visitors to access Fantasyland via the Big Thunder trail or the parade route along Matterhorn mountain. It’s been reported that Snow White Grotto and the Wishing well will still be accessible to visitors during the refurbishment.

According to OC Register, the castle will retain its color scheme of gray walls, pink towers, and bright blue roofs. The castle, designed with neo-romantic architecture, was inspired by Bavarian Neuschwanstein and French Chateau de Chenonceau castles, according to Disney.

“Sleeping Beauty Castle is the heart of Disneyland Park and is simply being refreshed,” said Walt Disney Imagineering art director Kim Irvine via email to OC Register. “It will remain the same beloved icon it is today when the refurbishment is complete.”

What are your thoughts on Disneyland’s Sleeping Beauty Castle temporarily closing for refurbishment? Let us know in the comments below!