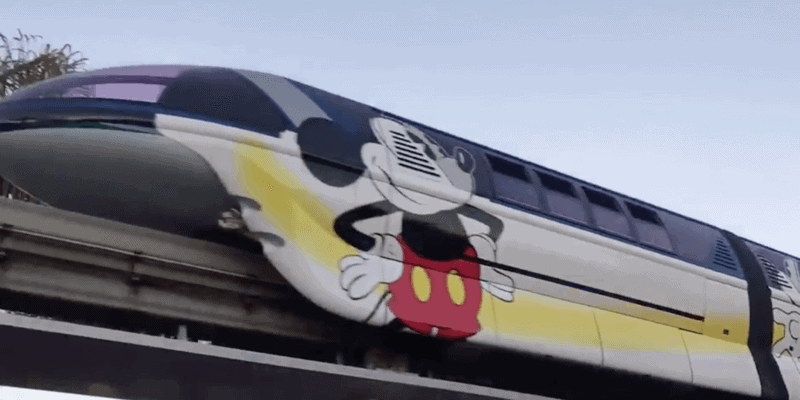 In celebration of Mickey’s 90th anniversary, Disneyland Resort is marking the occasion with an all-new Mickey-themed monorail wrap, which features images of the iconic mouse in several expressive poses found in some of Mickey’s most memorable shorts and films.

The new wrap premiered at Disneyland Resort yesterday, as seen below from our Twitter follower Paulina (@heartdisney10). The wrap starts at the beginning of the monorail with a paintbrush, which marks a yellow paint stroke down the side of the monorail’s crafts. This is joined by a pie-eyed Classic Mickey, who can be seen posing with a different expression on each craft.

The new wrap is perfectly themed for Get Your Ears On – A Mickey & Minnie Celebration, which premieres at Disneyland Resort this month.

More images of the Mickey-themed wrap:

This wrap is only one of the many celebrations happening at the Disney Parks around the world in honor of Mickey’s 90th Anniversary.

According to Disney, at Walt Disney World, Magic Kingdom has been celebrating the iconic mouse during the “Move It! Shake It! Dance & Play It!” Street Party, in addition to a special performance of “Happy Birthday” by the Dapper Dans on Main Street, U.S.A. Both of these celebrations began honoring the mouse in November 2018. These celebrations will be continued in 2019 with the premiere of Mickey & Minnie’s Surprise Celebration on January 18.

Shanghai Disney Resort kicked off their celebrations back in September 2018 with a brand-new Mickey-themed float at the opening of the Shanghai Tourism Festival. This was in addition to a giant birthday card installed at the park featuring birthday wishes from Mickey’s pals. Other celebrations included special food, merchandise, and a nighttime birthday spectacular at Enchanted Storybook Castle, which played for one-night-only during Mickey’s birthday on November 18.

Hong Kong Disneyland has been celebrating with their own World’s Biggest Mouse Party. This began back in November 2018 with commemorative park tickets, special food & beverages and merchandise, a hotel room overlay, and a “We Love Mickey” projection show, which is set to run through February 2019.

What are your thoughts on this new wrap at Disneyland Resort? Let us know in the comments below!