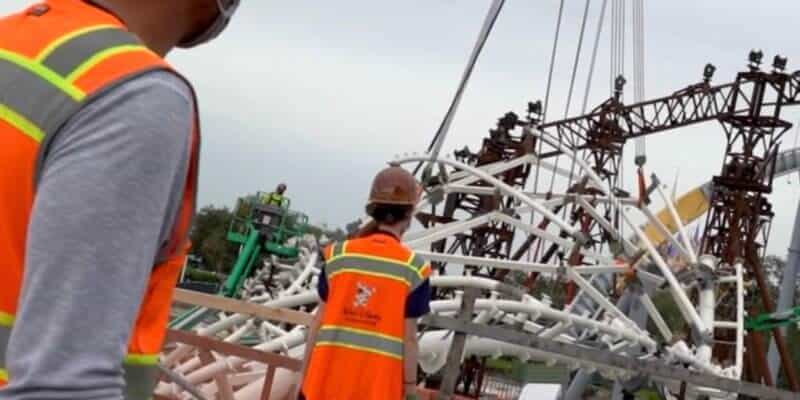 If you are a Disney Parks fan you know that Walt Disney World Resort has a massive amount of construction projects underway. And while some of those projects are nearing competition, others still have a ways to go.

Thanks to aerial images from theme park reporter @bioreconstruct on Twitter, we can see a comparison of construction progress at Disney World in 2020.

The Galactic Starcruiser — also known by its unofficial name, “The Star Wars Hotel” — is moving along at a decent pace despite setbacks from the pandemic. Disney confirmed earlier this year that this project was a priority and Disney is focusing on completing the hotel above other construction projects.

This massive hotel will be a completely immersive experience, transporting Guests to space for an over-the-top Star Wars stay aboard the Galactic Starcruiser, a ship known as the Halcyon. You can read more about what to expect when the hotel opens here.

As you can see from the photos, massive amounts of work have been done to ensure this hotel can open as soon as possible. There is no opening date from Disney yet, but we are crossing our fingers for an official update on the hotel soon!

The TRON coaster that is coming to Magic Kingdom continues to move forward, but the photos really put into perspective how much work has been done this year.

TRON Lightcycle / Run is a clone of the Shanghai Disneyland attraction of a similar name, TRON Lightcycle Power Run. We do not know what the inside of the show building looks like for the TRON coaster, but the exterior portion of the ride already has us excited to enter the grid. Once this coaster finally opens in Tomorrowland, it will help breathe some new life into that section of Magic Kingdom. At this time, an opening date has not yet been announced.

You can see more construction photos of the TRON coaster here.

EPCOT is undergoing major renovations. In the photos below, you can see entire buildings were removed during 2020.

If you have visited EPCOT recently, you probably noticed that the park has turned into a maze of construction walls. Although some projects that were originally planned for the EPCOT overhaul have been scrapped due to financial strain caused by the pandemic, we hope 2021 brings some of the construction walls down, and in turn, new experiences for Guests visiting the park.

So, that was just a glimpse at some of the projects that are still under construction at Disney World. Now that we are getting ready to usher in a new year, we will have to wait and see which projects could open in 2021.

What new attraction, or experience, are you most excited about that is coming to Disney World? Let us know in the comments!

We can help you plan the perfect Walt Disney World vacation — click here for more information.

Comments Off on How Disney World Construction Progressed in 2020