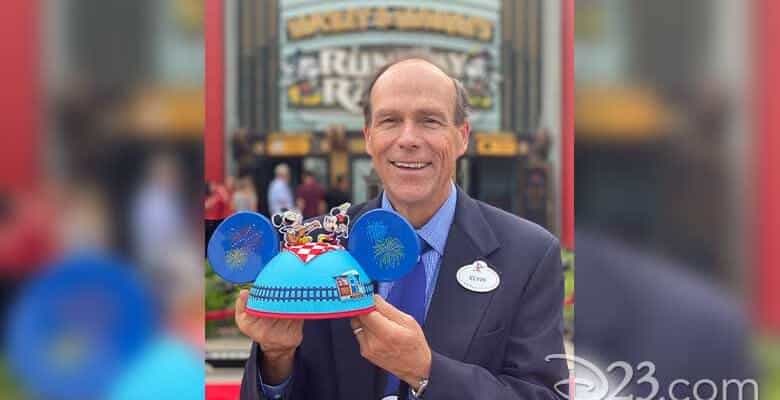 Today marks day one of retirement for Walt Disney Imagineer Kevin Rafferty.  Rafferty started his career with Disney back in 1974 as a dishwasher and worked his way through the ranks to become one of the chief Imagineers who has worked at Disney Parks around the world.

He has worked on numerous projects throughout his illustrious career, including The Twilight Zone: Tower of Terror, Toy Story Midway Mania, and Cars Land in Disneyland, which ironically, took over the parking lot where Rafferty used to park his car for his dishwashing job.

Rafferty recently spoke to D23 about many of the amazing aspects of his long Disney career.  He spoke about songs that he used to work on (and even sang some), attractions he wished that he worked on, and the highlight that ended his career, Mickey & Minnie’s Runaway Railway.

Rafferty spoke to the podcasters and said:

“It just felt like that attraction was just like the perfect cherry on top of the cake that was my long and prolific and wonderful and, you know, dream-like really, career.”

Rafferty was the Show Writer and Creative Director for the Mickey & Minnie’s Runaway Railway ride, which opened in Disney’s Hollywood Studios on March 4, 2020.  The same attraction is currently being built in Mickey’s Toontown at the Disneyland Resort in California, but the opening is not scheduled until 2023.

Rafferty has spoken about his affection for the ride in previous interviews done with D23.  He has said:

“It’s all about cartoon logic.  You go to places you don’t expect.  It’s very fun and whimsical and colorful and musical and there’s surprises around every corner.  And it’s got a beautiful, heartwarming Mickey and Minnie happily ever after ending finale.”

When Rafferty was asked why he decided to retire now, when he still has air left in his tires, he says that he was told from another Imagineer, that when the time came to stop, he would know.

“He said, ‘You know what Kev? When it’s time, you’ll know’, and I kind of did.  You know, I have a great sense of pride and accomplishment and, you know, the whole career has been like a dream.”

While Kevin and his immense creativity will be sorely missed, the impact that he has on so many Disney Park staples and classics will not be forgotten.  Thank you for all the magic Kevin!

What do you think of Mickey and Minnie’s Runaway Railway? Let us know in the comments!

Want to book a Disney vacation? We can help! Click here for more information.