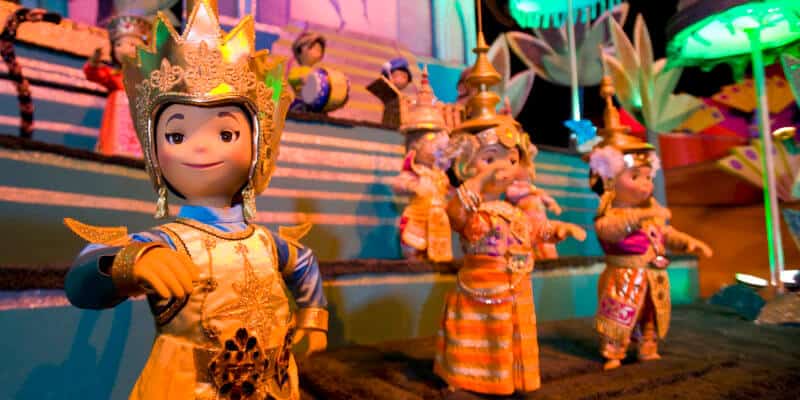 Speaking to the Disney Files Magazine Editor, Ryan March, about her rendition of the iconic song “it’s a small world”, Keala Settle (The Greatest Showman) says: “Singing it as a ballad, you have to listen to the words more, you’re no longer sitting in a boat.”

Most people know the song. Some love it, and for others, it is like stepping into a nightmare. The ride, which finds its home in most Disney Parks across the world, could be one of the most polarising attractions of any theme park, especially when it comes to Disney rides. With its iconic song, intricate props, and bright lights, “it’s a small world” — decorated by Mary Blair — is definitely one of the park’s more theatrical ride experiences.

The song, written by the Sherman Brothers, made its debut at the New York World’s Fair in 1964 before transferring to Disneyland in California in 1966. While Walt Disney wanted the song to be upbeat — a celebration of cultures and people coming together.  The original version by the Sherman Brothers was more subdued, having been written in the wake of the Cuban Missile Crisis.

It’s a loaded song, to say the least, and one that is sure to spark many heated debates among Disney fans. But, what it stands for can surely be a tonic for the trying times we are all currently living in.

What Happened in the Interview?

Keala Settle sat down with Ryan March on the Disney Parks YouTube channel to discuss what “it’s a small world” means to her, from childhood to now to performing the song on stage for the writer himself.

March talks about Settle’s performance of the song from the Sherman Brothers celebration (hosted by the Academy of Motion Picture Arts and Sciences) in 2018. In the 2021 interview, Settle reminisces about the ride:

“It’s the only place in the world where you can sit in a boat, and you start going through that precursor, before you get into the actual ride. And of course, the people are facing you, and they wave.

And you wave back.

Because there’s a secret thing that you guys know. You know that you’re here and you want to be here not just because of your kids. But, because this holds nostalgia for you as a child. Somewhere, someone has been touched by Walter Elias Disney in any way, shape or form.”

Settle gets teary as she continues to talk about her memories of “it’s a small world”, and what that “nostalgia” of the attraction represents. For her: How Disney has made an impact on her life, from child to adult, and the “magic” and “joy” the Walt Disney Company embodies.

Bringing it back to current events, March comments on how divided the world is today, and it’s easy to see what he means. From politics to pandemics, there is a lot of tension, anger, and confusion, but what “it’s a small world” has always hoped to do is reset those divides, to offer a place of togetherness and love, right there in the Magic Kingdom.

Watch the interview and performance here:

Who are the Sherman Brothers?

The Sherman Brothers are made up of real-life brothers, Richard M. Sherman and the late, Robert B. Sherman. From Mary Poppins to The Aristocats, the songwriting duo were behind some of the most quintessential movie musicals. As well as recording film scores, the brothers contributed music to the Disney theme parks, namely “There’s A Great Big Beautiful Tomorrow”, and “it’s a small world”.

If you want to see more of Keala Settle, The Greatest Showman is streaming now on Disney Plus!

Do you like Keala’s version of the song? Let us know in the comments!