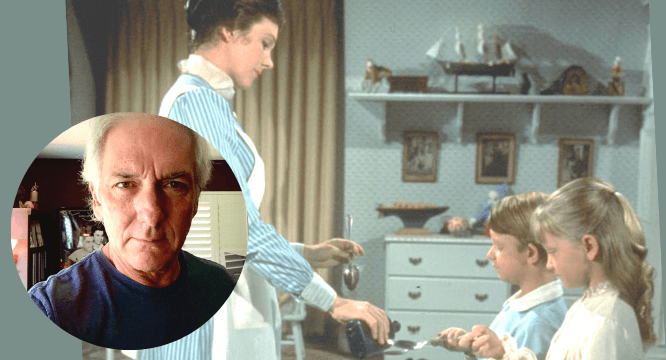 Behind so many earwigs from the classic Disney animation era are the musical Sherman Brothers. Richard and Robert, often known as Dick and Bob, penned classics heard in Mary Poppins, The Jungle Book, Aristocats, and more. Disney theme park fans will recognize One Little Spark, It’s A Small World After All, There’s a Great Big Beautiful Tomorrow” the “Tiki Tiki Tiki Tiki Room.

What you might not know is that Bob Sherman’s son, Jeffery, is the reason that Spoonful of Sugar was written! During the polio outbreaks in the early 1960s, the Shermans were penning songs for Mary Poppins and Jeffrey was behind one of the film’s most popular songs!

Spoonful of Sugar a Result of the Polio Vaccine

Three generations of Shermans are seen in the photo below, reshared on Robert Shermans’s birthday, December 19th. Robert Sherman appears in the foreground in a dashing tuxedo, his son Jeffrey behind him, and in the distance, Jeffrey Sherman’s son, Alex.

Jeffrey Sherman, son of Robert (Bob) Sherman, wrote a timely piece on his Facebook timeline about the upcoming vaccines and pandemic, relating the issue to his personal experience with Disney’s feature film, Mary Poppins. The lengthy, public post was shared on Tuesday, December 1, 2020, alongside a photo of Mary Poppins giving Jane and Michael Banks their medicine on spoons.

Jeffrey recalls being a child while his father and uncle worked tirelessly on the music for Mary Poppins, turning P.L. Travers’ story into a silver screen musical. The story begins,

“When I was a kid, they rolled out a vaccine for polio. We were given it at school on a sugar cube. I went home and my dad, who was working on Mary Poppins, asked how my day was.

What I didn’t know was that Julie Andrews who was hired to play Mary had not really liked the song my dad and uncle had written -“Through the Eyes of Love” – and it was rejected. It was their favorite song for the movie.
Walt asked the Sherman Brothers to come up with a new song that would be in line with Mary’s //Julie’s philosophy.
Dad asked me how my day was and I told him about getting the polio vaccine at school.
I was known for rejecting the booster shots at my doctors’ office and running away.
He said, “ Didn’t it hurt?””

This is where Jeffrey gave his father the magical words that ended up replacing Through the Eyes of Love with Mary’s best advice.

“I told him they put it on a sugar cube and you just ate it.
He stared at me, then went to the phone and called my uncle Dick.
They went back to the office and wrote -“A Spoonful of Sugar” (Helps the Medicine Go Down.”)
It’s my little corner of film music history I suppose. Inadvertently.”

Jeffrey’s sage advice doesn’t end there. He comments on getting back to our real normal, reflecting on the polio vaccine and the months ahead,

“For anyone I know here on FB, trust the doctors. When the vaccine for Covid comes out, get it.
We are all codependent on each other in this pandemic. Trust science and doctors and epidemiologists.
We are a small world and we will beat this enemy if we listen to those who know.
Be safe. Wear a mask. Be kind and thoughtful and considerate to your fellow man and woman.
We will beat this.

When I was a kid, they rolled out a vaccine for polio. We were given it at school on a sugar cube. I went home and my…

The post has been widely shared by both Facebook users and Disney fans for its nostalgia, advice, and feelings of positivity. If you are interested in learning more about The Sherman Brothers, we highly recommend the documentary, The Boys, now available on Disney plus.

What do you think about this small insight into Mary Poppins’ history? Leave us a comment below!