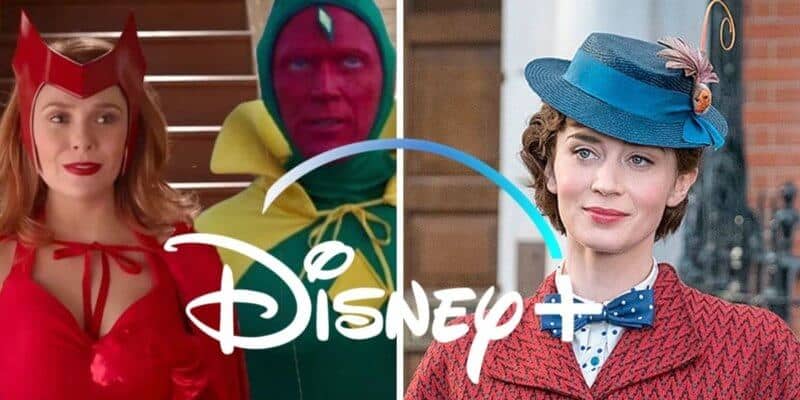 Disney+ is filled with so much content — from classic animated movies to Disney Channel tv shows and series’ to Marvel, Star Wars, National Geographic content, and more!

Related: Everything Coming to Disney+ in December 2020

Here is a complete guide to everything coming to Disney+ in January 2021.

Note: this list isn’t complete and Inside the Magic will continue to update this list as more information is released.

Beyond The Clouds – Episode 5

Beyond The Clouds is a documentary which is based on the Disney+ Original Movie, Clouds, which debuted on Disney+ on October 16th. The documentary brings viewers an exclusive look inside the production and the inspiration behind the Disney+ original movie. New episodes stream every Friday.

A 4K special in which we dive for the first time by night into a feeding frenzy of 700 sharks in Polynesia, the largest concentration of sharks in the world. Filmed with very ambitious camera gear, this documentary reveals unprecedented social behavior of sharks.

Dr. Seuss’ Horton Hears a Who!

Animated elephant Horton (Jim Carrey) finds a speck of dust floating in the Jungle of Nool. Upon investigation of the speck, Horton discovers the tiny city of Who-ville and its residents, the Whos, which he can hear but cannot see. Horton forms a friendship with the mayor of Who-ville, Ned McDodd (Steve Carell), and promises to transport Who-ville to safety. However, Horton encounters opposition from his jungle neighbors, who don’t want to believe in the existence of Who-ville.

Mr. Popper (Jim Carrey) is a successful real estate developer in Manhattan. He lives in a posh apartment on Park Avenue, and is on the fast track to a partnership in a prestigious company. However, his life changes radically when he receives a final gift from his late father — a live penguin, which is soon joined by five more penguins. The birds’ antics soon win over Mr. Popper, and as he bonds with the penguins, his chilly relationship with his ex-wife (Carla Gugino) and kids begins to thaw.

Lured to a Japan he hasn’t seen since World War II, century-old mutant Wolverine (Hugh Jackman) finds himself in a shadowy realm of yakuza and samurai. Wolverine is pushed to his physical and emotional brink when he is forced to go on the run with a powerful industrialist’s daughter (Tao Okamoto) and is confronted — for the first time — with the prospect of death. As he struggles to rediscover the hero within himself, he must grapple with powerful foes and the ghosts of his own haunted past.

After premiering in September, Earth to Ned is back to kick off the new year with 10 all new episodes!

From the Jim Henson Company comes a late-night talk show hosted by alien commander Ned and his lieutenant Cornelius, who call off the invasion of Earth after they fall in love with human culture. Broadcasting from the bridge of their spaceship, hidden deep underground, Ned and Cornelius interview Earth’s greatest resource, celebrities. With the help of the ship’s artificial intelligence, BETI, and the destructive CLODs, Ned must keep his show a secret from his home planet or suffer the wrath of his father, the Admiral of the Galactic Fleet.

Obsessed with winning an award, Ned hosts his own awards show, with D’Arcy Carden and Oliver Hudson. Cornelius is beamed to the surface to take an acting class. The CLODs make a Western.

When Ned gets stressed out, Yvette Nicole Brown and Jack McBrayer try to teach him how to relax. Cornelius is beamed to a “rage room.” Ned is troubled by a message from his home planet.

Actor/director Kevin Smith and actress Aisha Tyler help Ned indulge his 90’s obsession. Cornelius is sent to the future and discovers comedian Ben Schwartz is starring in a reboot of Ned’s talk show. The CLODs stage a 90’s-themed fashion show.

When Ned hears aliens may have built the pyramids, he investigates human conspiracy theories with Sherri Shepherd and Penn & Teller. Cornelius goes undercover as a human to find out what Earthlings really think about aliens.

After Ned catches Cornelius snacking after bedtime, Chef Roy Choi and Brenda Song help him become a foodie. The CLODs open their own restaurant, with disgusting results.

When BETI crashes, Ned’s interviews with Mayim Bialik and Margaret Cho are disrupted by glitches and blue ooze. Cornelius is trapped at the Intergalactic Whiz Desk.

When one of Ned’s CLODs runs away, Molly Ringwald and Chris Colfer try to explain “growing up.” Cornelius goes in search of the missing CLOD, and unexpectedly meets Grace VanderWaal.

With Ned’s dad on his way to Earth, Jason Ritter and Tig Notaro try to help prove humanity should be saved, and teach Ned about the true meaning of family. Cornelius makes a decision that may change his life. The secret origin of the CLODs is revealed.

Extras – Beyond the Clouds: A Firm Handshake

Justin discusses integrating music from Zach and Sammy’s album, “A Firm Handshake,” into the film. The choice is made to record the singing live on set to capture the raw emotion of the film, but the decision comes with challenges for production. Justin invites Sammy to contribute a song of her own for the final track in the film, and she looks for inspiration in her relationship with Zach.

Beyond The Clouds – Episode 6

Coached by choreographer Phil Wright, families take their moves out of the living room and into the spotlight to see if they’ve got what it takes to be the next champion and win a $10,000 cash prize.

Ferdinand is a young bull who escapes from a training camp in rural Spain after his father never returns from a showdown with a matador. Adopted by a girl who lives on a farm, Ferdinand’s peaceful existence comes crashing down when the authorities return him to his former captors. With help from a wisecracking goat and three hedgehogs, the giant but gentle bovine must find a way to break free before he squares off against El Primero, the famous bullfighter who never loses.

Toy Story That Time Forgot is a prehistoric-themed 22-minute animated television special, produced by Pixar Animation Studios and Walt Disney Television Animation that aired on ABC on December 2, 2014. It was written and directed by Sam & Max creator Steve Purcell and produced by Galyn Susman.

The official description of the upcoming MCU Disney+ series reads, “Living idealized suburban lives, super-powered beings Wanda and Vision begin to suspect that everything is not as it seems”.

Now an adult with three children, bank teller Michael Banks learns that his house will be repossessed in five days unless he can pay back a loan. His only hope is to find a missing certificate that shows proof of valuable shares that his father left him years earlier. Just as all seems lost, Michael and his sister receive the surprise of a lifetime when Mary Poppins — the beloved nanny from their childhood — arrives to save the day and take the Banks family on a magical, fun-filled adventure.

Beyond The Clouds – Episode 7

Princess Elena is on a journey that began years earlier when evil sorceress Shuriki took her parents and kingdom from her. Now, having defeated Shuriki, the royal teenager is due to take her place on the throne but needs help ruling Avalor — that assistance comes in the form of the Grand Council, made up of Grandfather Tito, Grandmother Cici and royal adviser Duke Esteban. Princess Elena goes on adventures — with wizard-in-training Mateo and magical Skylar at her side — that help her understand the traits that make a good leader.

Maya Dolittle, the youngest daughter of a man who can talk with animals, has inherited her father’s amazing gift. However, far from being a boon to her, the ability has brought only trouble. She heads to a summer camp to get in touch with her gift, then realizes that she holds the key to helping the financially strapped camp win an upcoming rodeo.

When, by executive decree, all the canine pets of Megasaki City are exiled to a vast garbage-dump called Trash Island, 12-year-old Atari sets off alone in a miniature Junior-Turbo Prop and flies across the river in search of his bodyguard-dog, Spots. There, with the assistance of a pack of newly-found mongrel friends, he begins an epic journey that will decide the fate and future of the entire Prefecture.

Beyond The Clouds – Episode 8

Beyond The Clouds – Episode 9

Dr Jan Pol has been a practicing veterinarian for more than half his life. In 1981 he and his wife, Diane, opened a vet business out of their home, and over the years it has grown to service more than 19,000 clients. Set in Central Michigan’s farm country, this reality series follows Dr Pol and the work done at Pol Veterinary Services. Specializing in large farm animals, Dr Pol treats horses, pigs, cows, sheep, alpacas, goats, chickens and even an occasional reindeer. The program also features Dr Brenda Grettenberger, who has worked with Dr Pol since 1992.

Ramona Quimby (Joey King) is a plucky youngster with an irrepressible sense of fun and mischief — a fact that keeps her big sister, Beezus, on her toes. Ramona’s vivid imagination and boundless energy serve her well when the two girls must help save their family’s home on Klickitat Street.

Which of these titles are you looking forward to most in January 2021? Let us know in the comments below.