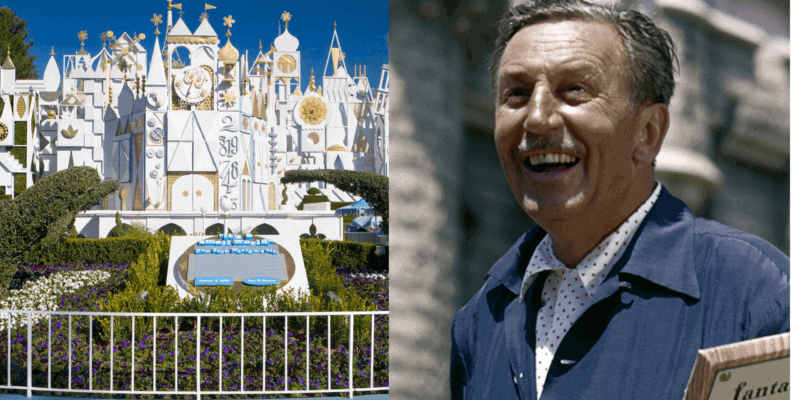 “it’s a small world” is a bit like marmite, you either love it or you hate it. Even here on the Inside the Magic team we have those who aren’t huge fans of the ride.

For those that are either sitting on the fence or who perhaps could be shifted away from the ‘I hate the ride’ camp, we’ve put together a few reasons why it’s a small world should be classed as a beloved earworm with an important message over that “annoying song with the weird dolls.”

The message it sends

The song was actually written back in 1962 after the Sherman Brothers (more on them later) were challenged to write a song that could easily be translated into many languages and played as guests rode the attraction.

The song was actually inspired by the events of the Cuban Missile Crisis and influenced the brothers on creating a song that conveyed a message of peace and brotherhood.

The attraction was originally set to be called “Children of the World” and was changed to it’s a small world after Walt Disney loved the song and changed the name.

The message of the song has never been more important and even after so many years, it’s such an important message to convey.

Though there are some adults that go crazy with fear, anger or dread when they get near the attraction, it is one of the best attractions at any Disney theme park for getting a young child interested in going on rides.

When I was a kid, it’s a small world was used as a precursor for building up to my (irrational) fear of riding Pirates of the Caribbean. I felt that if I could do one boat ride, I could do any boat ride!

From young babies to toddlers and older children, the song in combination with the dolls and bright colors always seems to do a great job at retaining the attention of kids on the attraction for the entire duration. A welcome break from all the running around all day!

The Sherman Brothers have gone down in history as writing more motion-picture musical scores than any other songwriting team. Their work includes Mary Poppins, The Jungle Book, Bedknobs and Broomsticks, The Aristocats, and of course the work on theme park attractions including “it’s a small world”, Walt Disney’s Enchanted Tiki Room, and The Carousel of Progress.

We find it very difficult to dislike anything the two legendary brothers worked on for Disney!

Walt Disney himself worked alongside those in WED Enterprises (Imagineering) to create the attraction in just 11 months in time for the 1964 World’s Fair.

Now personally I am not of the opinion that everything Walt Disney worked on was gold but it was one of the final things that he worked on before his death in 1966 and it’s an attraction that has stood the test of time.

I should also add that the proceeds that the attraction made during the two seasons it appeared at The World’s Fair were donated to UNICEF.

Try having fun with it

The fact that I am writing a positive piece on the attraction says that obviously, I have a lot of time and love for “it’s a small world.” However… my wife and several members of my family and friends aren’t so keen on it but I make them ride it anyway. They love it in a weird way because they get to see how happy the attraction makes me.

Also, we always take pictures of our friends who hate it, and those memories and photos of them looking annoyed, do a great job at making us laugh every time we look at them. Have fun with it!

Hopefully at least one of the reasons has made you at least reconsider riding it’s a small world the next time you are in a Disney park, whether it be Magic Kingdom, Disneyland Paris, Hong Kong Disneyland Park, or Tokyo Disneyland.

Are you a fan of “it’s a small world” or does it get on your nerves? Let us know in the comments below!

Comments Off on OpEd: “it’s a small world” Is a ‘Beloved Earworm’ and Not an ‘Annoyance to the Ears’