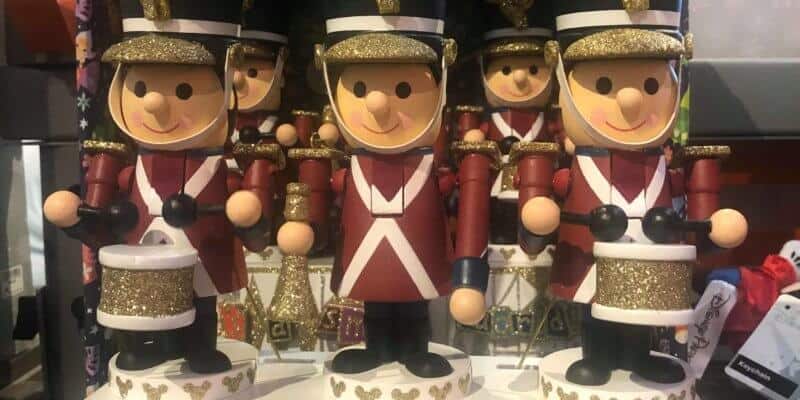 “It’s a world of laughter a world of tears…” it’s the song we can’t get out of our heads!

But now, you don’t have to rely on that to take the song home with you! Inside the Magic has found a beautiful “it’s a small world”-themed music box available now at Walt Disney World.

Called the “Musial Nutcracker,” this beautiful piece features three nutcracker soldiers. Two hold snare drums while the middle holds a bell, and they play along to the song, just like their brothers in small arms do in the ride itself. These nutcrackers are dressed in dark red uniforms with tall black hats, and the entire ensemble is garnished in glittered gold. The base of each soldier also features Hidden Mickeys.

This decorative piece could be the piece to complete any Disniac’s Disney Christmas display. But while the soldiers are nutcrackers, the holiday-ness of this piece appears to be subtle enough to be displayed year-round.

You can find the “It’s a Small World” Musical Nutcracker is available at Mouse Gears in EPCOT. It’s priced at $99.99.

“it’s a small world” is a Disney Parks staple whether we want it to be or not. The masterpiece of legendary Imagineer Mary Blair was unveiled at the 1964 World’s Fair with other Disney attractions such as Carousel of Progress. The famous (or infamous) song was written by the Sherman Brothers (Richard and Robert Sherman), who also wrote other park hits such as “There’s a Great Big Beautiful Tomorrow,” and “The Enchanted Tiki Room.” While the original ride is still in operation at Disneyland park in California, replicas can be found in the Magic Kingdom of Walt Disney World as well as in Tokyo Disney, Disneyland Paris, and Hong Kong Disneyland. Shanghai Disney Resort famously does not host the ride in its park.

Are you looking to book your next Disney trip? The experts at Academy Travel are standing by to help make this next trip the most magical yet!

What do you think of this cute little music box? Is “It’s a small world” one of your favorite rides? Let us know in the comments!