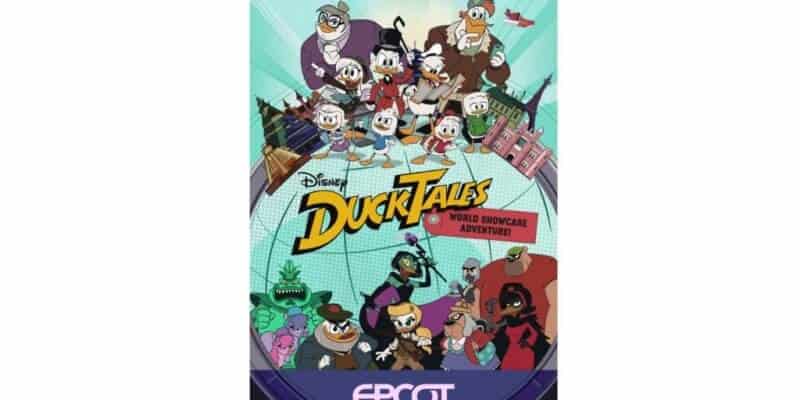 Oo-oo-hoo! Clan McDuck is on their way to EPCOT’s World Showcase in a brand new interactive adventure!

Join Scrooge McDuck, Donald, Launchpad, Webby, and the boys on their latest international treasure hunting adventure. By using your smartphone, you’ll be able to run off to exotic destinations all over the world, battle some villans, confront guardians of ancient artifacts, and maybe solve a mystery or re-write history while you’re at it.

One of the attractive bits for Agent P and Kim Possible’s adventure was the secret agent cell phones guests would pick up from Kiosks around World Showcase carry with them to hear clues and instructions. But unlike the themes before, guests can bypass the old kiosks and join in the DuckTales World Showcase Adventure simply by downloading the Play Disney Parks Mobile App on your smartphone. There is no word yet on when this revitalized version of the scavenger hunt will be open.

DuckTales is a reboot from the famous 90s Disney Channel show of the same name. Scrooge McDuck has filled his home with his family: Donald Duck, his nephews Huey, Dewy, and Louie, as well as their mother/Donald’s Sister, Della Duck. The lovably dense pilot Launchpad, Miss Beakley (aka agent 22) and her grandaughter Webby also join in the fun. Together they seek adventure on all corners of the world from the lost city of Atlantis to Mount Never-rest while dodging some silly yet determined bad guys like Finthart Glomgold, Mark Beaks, and Ma Beagle and the Beagle Boys.

Seasons 1 and 2 of the new  DuckTales, as well as the entire original series and The DuckTales Movie, are now available on Disney+.

If you are planning a trip to EPCOT, our friends at Academy Travel are standing by to help you make the most of your adventure.

Are you excited for the DuckTales World Showcase Adventure? Which version of the scavenger hunt has been your favorite? Let us know in the comments!

Comments Off on Coming to EPCOT: DuckTales World Showcase Adventure