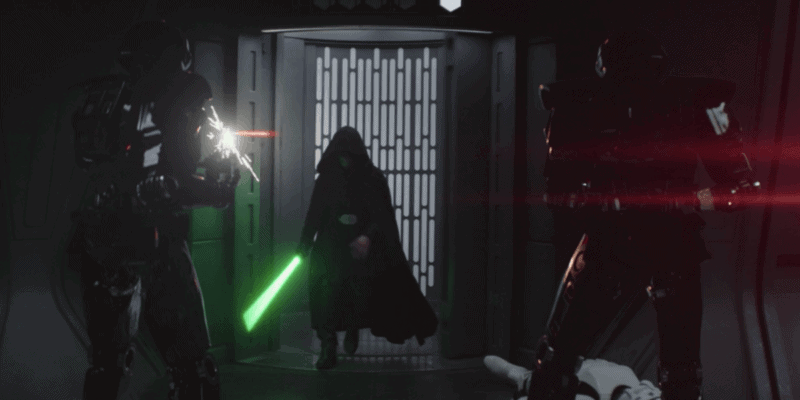 Lucasfilm has announced a new behind-the-scenes special for Disney+ celebrating Mark Hamill’s thrilling cameo as prime Luke Skywalker in The Mandalorian Season 2 finale. The upcoming special promises to go inside the instantly iconic reveal of the Jedi Master’s return, and one of the best-kept secrets in all of the Star Wars galaxy.

Related: ‘The Mandalorian’ Ties For Most 2021 Emmy Award Nominations

After being honored by the Television Academy with a whopping 24 nominations at the upcoming 2021 Primetime Emmy Awards — including a nod for Best Drama Series for the second year in a row — Lucasfilm trumpeted the Disney+ bonus episode of Disney Gallery: Star Wars: The Mandalorian. Entitled “Making of the Season 2 Finale” the special extra episode will offer Star Wars fans an exclusive look at how the creative team behind executive producers Jon Favreau and Dave Filoni’s acclaimed series brought Return of the Jedi (1983) -era Luke Skywalker into one of the most riveting moments of The Mandalorian so far.

The Mandalorian special “Making of the Season 2 Finale” will air on Disney+ on August 25. The show will offer a peek behind the curtain at the digital effects used to digitally de-age Mark Hamill to recreate the appearance of young Luke Skywalker. As with other entires in the Disney Gallery: Star Wars: The Mandalorian series, it’s expected that showrunner Jon Favreau will continue his role as interviewer and moderator for roundtable discussions with key Mandalorian creatives, offering something of an oral history of young Luke Skywalker’s return. Read the official announcement from Star Wars below:

“‘Making of the Season 2 Finale’ is a behind-the-scenes look at the making of this celebrated “chapter” of The Mandalorian, with a focus on the technology used for recreating Luke Skywalker. It delves into the collaborative process, including working with Mark Hamill, to create an authentic and fitting recreation, and explores the immense pressure and responsibility the filmmakers had in bringing back one of the most important characters in film history.”

Related: Grogu’s Savior Could Be a Very Unexpected Jedi

How does Luke Skywalker fit into The Mandalorian?

Our heroes suddenly find themselves outgunned and outflanked by a deadly squad of dark troopers. As the dark troopers close in, the hooded visage of the Jedi Master Luke Skywalker appears, green-lightsaber blazing, with R2-D2 in tow. Peak Luke Skywalker’s brief appearance to rescue Grogu in a critical moment to close out Mandalorian’s second season, was considerably better received by critics and Star Wars fans than the character’s appearance in the Disney sequel trilogy — a series that many fans felt did a disservice to the legacy of Hamill’s iconic Jedi.

In an earlier episode, Grogu had reached out through the Force in an effort to find a Jedi willing to take him on as a pupil — as advised by Ahsoka Tano (Rosario Dawson) in “Chapter 13: The Jedi.” The Season 2 finale also featured another bombshell post-credits scene that teased the spinoff series The Book of Boba Fett.

Are you excited to deep dive into Mark Hamill’s return as young Luke Skywalker and one of the most epic Star Wars moments of all time? Let us know in the comments!