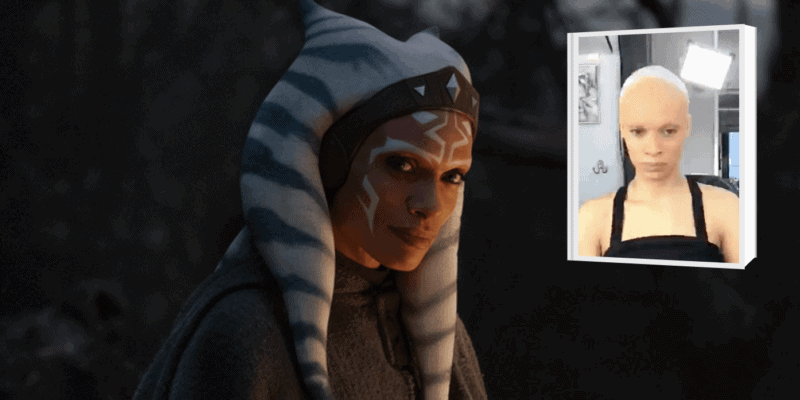 When Star Wars fans learned that fan-favorite animated character Ahsoka Tano would be making her live-action debut in The Mandalorian Season 2, there were some initial casting concerns.

Many Star Wars: The Clone Wars and Star Wars Rebels viewers were reticent to see anyone but animated series voice actress Ashley Eckstein take-on the role of Tano. Once Rosario Dawson made her live-action debut in The Mandalorian Season 2, Episode 5 (“Chapter 13: The Jedi”), though, the reception to her portrayal was almost universally positive.

Tano, who was Anakin Skywalker’s Padawan, is even set to receive her own Mandalorian spinoff series, simply titled Ahsoka. The show, which was announced at the 2020 Disney Investor Day event, will run concurrently with The Mandalorian Season 3 and another spinoff, Rangers of the New Republic.

Yesterday, Dawson shared a new social media video showing exactly what it takes to transform into the Togruta character. She wrote:

Happy #AhsokaTanoDay! Thank you @Ashley_Eckstein for bringing Ahsoka to life for us all. It’s one of the greatest honors & privileges of my life to share this remarkable character w/ the world alongside you.

Happy #AhsokaTanoDay ! Thank you @Ashley_Eckstein for bringing Ashoka to life for us all. It’s one of the greatest honors & privileges of my life to share this remarkable character w/ the world alongside you. #DreamTeam @starwars @dave_filoni @Jon_Favreau #BrianSipe #SamanthaWard pic.twitter.com/9JThoyrm6q

The video gives an inside look at the intense process Dawson must go through in order to become Ahsoka Tano. As The Mandalorian saga continues to expand on Disney+, Dawson will hopefully have the opportunity to appear as the Jedi in Ahsoka and beyond.

At this time, little is known about story lines of The Mandalorian Season 3 and Rangers of the New Republic. It has been confirmed that Pedro Pascal will reprise his role as bounty hunter Din Djarin.

There has not yet, however, been confirmation of where Grogu (AKA The Child AKA Baby Yoda) will appear again. In The Mandalorian Season 2 finale episode (“Chapter 16: The Rescue”), the Force-sensitive infant left to complete his Jedi training with Star Wars icon Luke Skywalker (a CGI version of Mark Hamill).

Therefore, it’s possible that Jedi Knight Skywalker and Grogu could either be getting their own spinoff series or that they could resurface in the third season of showrunner Jon Favreau and executive producer Dave Filoni’s hit series. We will simply have to wait and see.

Tano actually played an extremely important role in Grogu and Djarin’s relationship the second season of The Mandalorian. She was able to explain the tiny foundling’s tragic backstory — he was at the Jedi Temple on Coruscant during Emperor Palpatine’s execution of Order 66  — and tell Djarin his real name.

What do you think about Rosario Dawson’s amazing transformation into Ahsoka Tano? Are you looking forward to her reprising the role in the Star Wars universe?