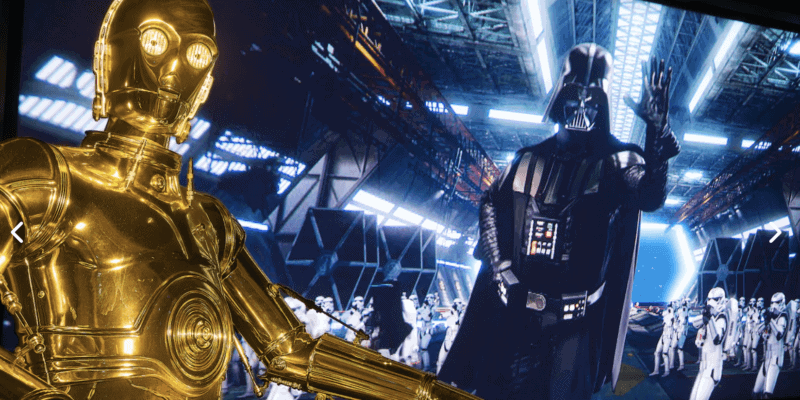 Years before The Walt Disney Company officially purchased Lucasfilm, Ltd. from George Lucas in 2012, the Star Wars franchise had a presence at Disney Parks.

While most Star Wars fans who enjoy visiting Disney theme parks have ridden Star Tours at least once, what many Disney Parks Guests don’t know is that George Lucas himself actually influenced one of the ride’s most memorable moments!

The new Disney+ Original series Behind the Attraction shared new details about Star Tours, noting that the idea of “casting” a Guest as a “Rebel Spy” as part of the attraction’s introduction was actually George Lucas’s idea!

“George wanted us to have a spy in the audience,” Imagineer Tom Fitzgerald said.

He continued, “What if, actually, we could take a picture of someone in the cabin and put it up on screen and really let a Guest see themselves as a rebel spy?”

The concept behind this particular attraction is that Imperial forces stop the transport vehicle Guests are riding on during the Empire’s search for a Rebel spy. When the Galactic Empire shows up, they point a scanning device at the crowd, then project an image of one Guest on a screen.

Next time you ride Star Tours, remember that the Star Wars creator himself played a major role in making the ride what it is today.

The Behind the Attraction series, hosted by Dwayne Johnson/The Rock (Jungle Cruise, Moana), on Disney+ takes Disney Parks fans behind the scenes of many popular rides and attractions, including the Haunted Mansion, “it’s a small world”, Space Mountain, the Hall of Presidents, and both castles — Sleeping Beauty Castle at Disneyland Resort and Cinderella Castle at Walt Disney World Resort.

Discover more about all of your favorite rides when you watch Behind the Attraction streaming on Disney+ now.

Featuring a flight simulator, digital 3D video, Audio-Animatronics characters and “in-cockpit” special effects and music, this attraction immerses you in the Star Wars mythology for an unforgettable intergalactic adventure.

Did you know George Lucas helped Imagineers with Star Tours?