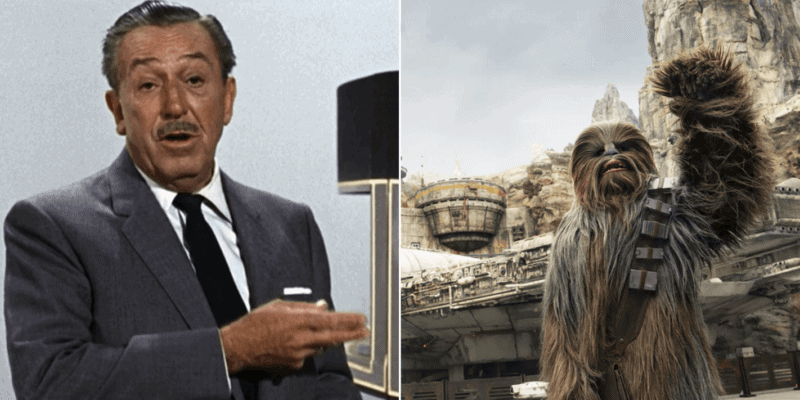 And, yet, ironically, Walt himself was the brains behind one of the fan-favorite rides at Star Wars: Galaxy’s Edge. The Star Wars land, which is set on the Outer Rim planet of Batuu, can be found at both Walt Disney World Resort’s Disney’s Hollywood Studios Park and Disneyland Resort’s Disneyland Park.

The Behind the Attraction series, hosted by Dwayne Johnson/The Rock (Jungle Cruise, Moana), on Disney+ takes Disney Parks fans behind the scenes of many popular rides and attractions, including the Haunted Mansion, “it’s a small world”, Space Mountain, the Hall of Presidents, and both castles — Sleeping Beauty Castle at Disneyland Resort and Cinderella Castle at Walt Disney World Resort.

In the Star Tours episode, viewers also get to learn about how the two rides at Galaxy’s Edge — Star Wars: Rise of the Resistance and Millennium Falcon: Smugglers Run — came to be.

Speaking specifically about Smugglers Run, which puts Guests in the cockpit of Han Solo (Harrison Ford) and Chewbacca’s Corellian freighter — though after Han’s death at the hands of Kylo Ren (Adam Driver) in Star Wars: Episode VII – The Force Awakens (2015) — Walt Disney Imagineer Asa Kalama explained, “It was a natural fit for motion simulator technology.”

Meanwhile Galaxy’s Edge Imagineering mastermind Scott Trowbridge added, “We knew we had to put you in control [of the Millennium Falcon].”

The narrator of Behind the Attraction noted, “…it almost seemed too good to be true.” Trowbridge continued, “Wait a minute — there’s only Millennium Falcon, there’s only one cockpit. There’s only, like, six seats in that cockpit. Oh my gosh, the line for this, you know, it’s like you’re going to be able to get, like, a hundred people a day.”

Related: Did a Carousel of Progress Character Retire to Haunted Mansion?

Enter Walt Disney. As the narrator espouses, “The Carousel of Progress was a theater in which the audience itself moves in their seats around the stages.”

Related: Facts and Secrets About Walt Disney’s Carousel of Progress

The design of Millennium Falcon: Smugglers Run was ultimately taken almost directly from the iconic Carousel of Progress attraction.

Walt Disney Imagineer John Larena explained, “When you cross that threshold into the cockpit of the Falcon, you’re actually walking into the Carousel of Progress…you don’t realize there’s actually five other pie wedges of theaters that are watching different scenes of this same show at the same time you load into it.”

And, that is how Walt Disney literally left the blueprint for a Star Wars ride that wasn’t developed until over five decades after his death. Do you have goosebumps yet?

Get the full story when you watch Behind the Attraction streaming on Disney+ now.

Disney officially describes Millennium Falcon: Smugglers Run — which lets you go on your own search for coaxium with space pirate Hondo Ohnaka (he’s part-owner of the Falcon after Han’s tragic death) as your guide — as:

Are you astounded by this incredible connection between two popular Disney attractions?