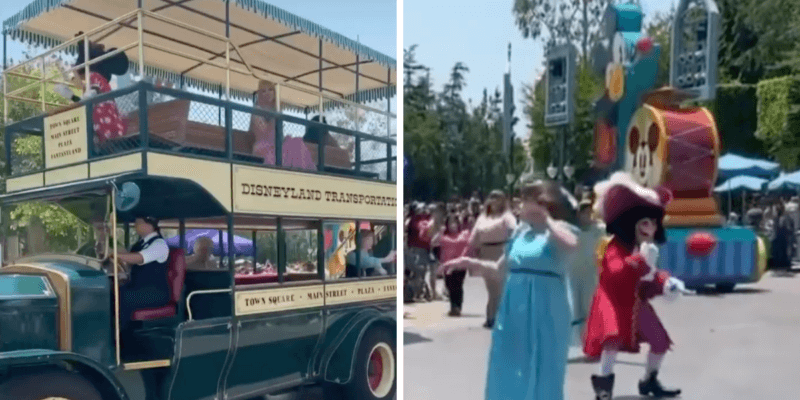 Dreamers of all ages, keep your eyes on Main Street, U.S.A., and the parade route at Disneyland Park! The first cavalcade since Disneyland Resort’s reopening paraded down the streets today, surprising Disney Guests with smiles, waves, and music.

Disney fans visiting Disneyland Park today were treated to what may have been the first cavalcade since the park reopened this spring. Small crowds gathered to wave and take a picture from the side, with plenty of classic Disney parade music heard overhead.

A video from @trulydest (reposted by theme park blogger @thecalibae) showing the cavalcade surfaced today showing all the fun starting near the “it’s a small world” area.

Mickey Mouse started the cavalcade in the classic Disneyland Fire Engine, followed closely by Donald, Goofy, Pluto, Chip, and Dale. Directly behind them, we see a slew of Princesses and Heroines riding in the Omnibus. Minnie Mouse leads the group, front and center on the upper level, along with her driver at the wheel. Following on foot are more Disney characters: Peter Pan, Wendy, Hook, Jasmine, and Genie.

Documenting the return of the Disney Park cavalcade on camera, an Instagram feed-style video from @thecalibae is captioned,

Looks like a calvacade returned today to Disneyland! I have no idea if it’s a today thing or a now on the schedule type of thing. But man it feels good to see something like this return to Disneyland. Video from @trulydest.

Behind the favorite Disney characters on foot, we see a slow-rolling Mickey Mouse parade float, seen initially in Mickey’s Soundsational Parade. Character and parade attendants clap their hands and follow along. While we don’t know if this (or any) particular cavalcade is on a schedule (Disney perfects the “surprise and delight” element with this delightful procession), we hope there is more to come as the summer rolls along.

The entire Disneyland Character Cavalcade can be seen here from start to finish, thanks to a total capture by the Disney Hype Beast (on Instagram with a handle of @disney_hype_beast_80):

Princesses galore loaded up onto the Omnibus for a ride around the park. While Disneyland has featured a variety of character sightings in both Disneyland Park and Disney California Adventure Park, this is so exciting to see the return of a cavalcade, and hopefully in the future, parades! Here on the Omnibus we can see Minnie Mouse, Aurora (Sleeping Beauty), Anna, and Mulan, Elsa, and Moana on the other side of the vehicle.

Did you catch this surprise character cavalcade at Disneyland? Leave us a comment about who you want to see walking down the parade route!

Comments Off on Character Cavalcade Surprises Guests at Disneyland Park!