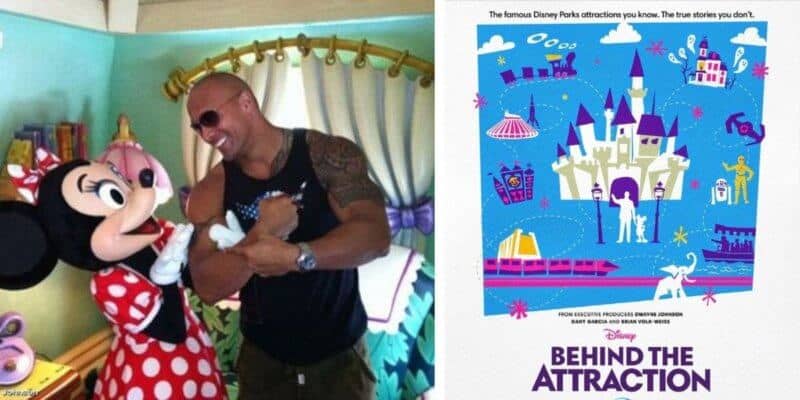 Dwayne, “The Rock” Johnson, has had his hand in many different aspects of the Walt Disney Company, and now, he is sharing his excitement about his latest series!

2021 is shaping up to be a big year for Johnson when it comes to Disney! The WWE superstar was heavily introduced to Disney fans after he played the voice of demigod Maui in Moana. Now, fans are excited to see him star in the live-action Jungle Cruise movie alongside Emily Blunt this summer.

Today, Johnson (@therock) took to Instagram to talk about his new Disney Parks series coming to Disney+, Behind the Attraction:

Take a moment now to think about your FAVORITE RIDES when you and family visited the DISNEY PARKS around the world ? ?

From SPACE MOUNTAIN to SPLASH MOUNTAIN – from PIRATES OF THE CARIBBEAN to JUNGLE CRUISE – from STAR WARS all the way to ITS A SMALL WORLD and many more!

Our @sevenbucksprod is partnering with @DisneyPlus and director Brian Volke-Weiss (“The Toys That Made Us”) to bring you the highly anticipated original series called BEHIND THE ATTRACTION.

A fascinating behind the scenes look at how all these famous and beloved rides became famous, beloved and ICONIC DISNEY rides.

And if you look closely at this poster ? you’ll see a certain big, brown, bald “Skipper Frank” taking his unsuspecting passengers on the ADVENTURE OF A LIFE TIME from JUNGLE CRUISE ? ??

This is gonna be a FUN SERIES for you and your families to watch!

For fans who love to learn more about Disney history and attractions, this series will surely give you an extra hand of knowledge on your next Disney visit and likely, will serve as a great way to combat the Disney blues until you are back at Disney World, Disneyland, or any Disney Park around the globe.

It looks like The Rock is not the only one hyped for this series, as fans are already starting to share their excitement on social media.

YouTuber TPM Vids (@TPMvideos) shared their excitement for the series as well:

VERY excited about the Behind the Attraction Series coming to Disney+!!

VERY excited about the Behind the Attraction Series coming to Disney+!! https://t.co/wwMy8dEG8N

Jason S (@theluckyman) shared his excitement as well by Tweeting about the announcement:

News from Variety: Disney Plus’ ‘Behind the Attraction’ To Premiere In July (TV News Roundup) https://j.mp/3x2kM63 via @variety

News from Variety: Disney Plus’ ‘Behind the Attraction’ To Premiere In July (TV News Roundup) https://t.co/BaNxPlDq4f via @variety pic.twitter.com/SlD9h95bkV

And if we take a look at Johnson’s Instagram post, it is easy to see that his fans are very excited about the series, as they are filling the comments with heart emojis and heart-eye emojis.

With rare interviews included in the series from past and present Imagineers, this will surely be a learning experience every Disney fan will want to pay attention to! The show will premiere on July 16.

Disney describes the series as:

“Behind the Attraction” delves into Disney Parks’ rich, amazing history using archival and never-before-seen footage and photographs to unveil how the attractions came to be and how they’ve been refined over the years as new ideas surface and technology evolves.

Are you excited for the new Behind the Attraction series coming to Disney+?