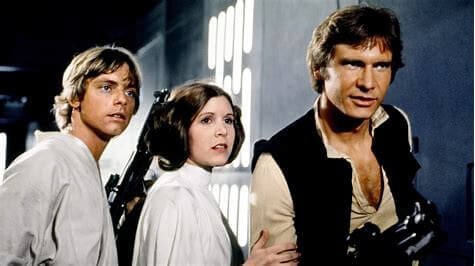 Star Wars is one of the biggest franchises of all time. It began all the way back in 1977 when a director called George Lucas released an unexpected global hit in the form of Star Wars — a rousing, sci-fi adventure in a galaxy far, far away…

Here is the ultimate guide to Star Wars Episode IV – A New Hope.

When did Star Wars Episode IV get released?

The Star Wars movie was released in the United States on May 25, 1977. George Lucas’ film was seen as a potential financial risk and only opened in fewer than forty theaters upon its initial release. The space-opera movie went on to break box office records and became the highest-grossing movie of all time, surpassing the record held by Steven Spielberg‘s Jaws (1975), at its time of release.

Star Wars has been credited as reviving the 20th Century Fox Studio, with stocks doubling to record highs in the summer of 1977. The movie went on to receive ten Academy Award nominations, winning seven — including the Star Wars franchise’s only acting nomination to date, for Alec Guinness’ portrayal of Obi-Wan / Ben Kenobi.

Even Lucas wasn’t prepared for the success of his now seminal film. During Star Wars’ initial release, the director was vacationing in Hawaii when the global success of the movie became apparent. Star Wars has been re-released many times since its original outing, and — when adjusted for inflation — is the second highest-grossing movie of all time in North America and fourth worldwide.

Why does the original Stars Wars trilogy start at Episode IV?

The original Star Wars trilogy begins with Episode IV to sit in line with its sequel Star Wars: Episode V – The Empire Strikes Back (1980). Lucas had not expected Star Wars to become the instant phenomenon that it did, and therefore had not envisaged the longevity of the film franchise. However, due to Star Wars‘ runaway success, Lucas spawned the sequel, which was dubbed as Episode V. Therefore, in the 1981 theatrical re-release of Star Wars, both Episode IV and A New Hope, were added to the title.

The reasoning behind the Star Wars director’s choice to use Episode V, and thus Episode IV and VI, instead of starting at Episode I, is relatively vague. Although Lucas has said in the past that he saw the original Star Wars outings as parts of a grander story. In Denise Worrell’s book — “Icons: Intimate Portraits” from 1983 — Lucas discusses his ideas for multiple Star Wars trilogies. Via The Take, Worrell’s book revealed:

The book quotes Lucas saying he intended to make three Star Wars trilogies: one dealing with the social and political […] another covering personal growth and self-realization […] and a final stanza delving into moral and philosophical problems.

What was the reception of Star Wars Episode IV by fans?

Star Wars is one of the most popular films of all time, making characters like Luke Skywalker and Han Solo household names, and launching the incomparable Star Wars Saga. After its United States release just before Memorial Day Weekend, Lucas apparently became more aware of Star Wars success when he encountered huge lines of people queuing for the Mann’s Chinese Theater waiting to see his movie. In December 1977, the movie was released to a select few theaters in the UK and due to its popularity overseas, massive lines were reported on its opening day.

Who is in the cast of Star Wars Episode IV?

The Star Wars cast was announced in 1976. Alec Guinness was one of the first member of the cast to be confirmed for the epic space drama, mentioned as a “bearded desert rat” in the original casting announcements. Star Wars‘ producer Gary Kurtz would then go on to confirm the feature film debut of Mark Hamill as Luke Starkiller — although this was later changed to Skywalker — before revealing that Harrison Ford and Carrie Fisher had also joined the cast as the space smuggler, Han Solo, and Princess Leia Organa, respectively.

Even though it would be Mark Hamill’s Luke Skywalker that would lead the franchise, it was Doctor Zhivago‘s (1965) Alec Guinness that would be cited as appearing in a leading role. The original cast was fleshed out with Dave Prowse’s Darth Vader and Peter Cushing’s, Grand Moff Tarkin. Anthony Daniels would star as the humanoid droid, C-3PO, alongside Kenny Baker’s legendary R2-D2, and Peter Mayhew played the fan-favorite role of Chewbacca — Han Solo’s Wookiee companion.

Who are the most popular characters from Star Wars Episode IV?

It’s hard to be sure who was the most popular character back in 1977, although Star Wars did catapult the relatively unknown trio of leads into the stratosphere, where they gained widespread recognition for their roles in the movie.

According to one of the leading ranking websites, Ranker, Darth Vader tops the list of “Best to Worst ‘Star Wars’ Characters”, closely followed by Obi-Wan Kenobi, with Luke Skywalker and Han Solo taking places four and five, respectively. Rolling Stone‘s “50 Best ‘Star Wars’ Characters of All Time” sees the roguish Solo come in at number one with Princess Leia also in the top five.

Why is Chewbacca such a beloved character of the Star Wars franchise?

Chewbacca, the right-hand Wookiee to Han Solo has cemented himself as one of the most beloved characters in the Star Wars universe. First appearing in A New Hope, Chewbacca — who, for the most part, was played by Peter Mayhew until his retirement in 2015 — has appeared across most of the Star Wars Skywalker Saga.

Chewbacca became popular due to his loyalty and calming nature. A story from The Hollywood Reporter acknowledged the following:

Chewbacca, largely through the expression of Mayhew’s eyes and body language, became our emotional lens. Regardless of language barriers, age or familiarity with Lucas’ sci-fi saga, Chewbacca showed us what to feel across these films, with larger-than-life gestures harkening back to film’s silent era, and a subtle expressiveness that gave him the same range as Star Wars’ human characters.

Lucasfilm decided to remove the Star Wars Expanded Universe from the official canon when beginning to develop the sequel trilogy. Many thought this pointed to the fact that due to Chewbacca dying in one of the novels within this universe, he wouldn’t be able to appear in the Star Wars sequels, and thus upsetting his legions of fans. Chewbacca returned in Star Wars: Episode VII – The Force Awakens (2015)

What is the summary of Star Wars Episode IV?

Under attack from the Galactic Empire, Princess Leia hides the schematics to the powerful Death Star — a planet-destroying space station — in an astromech droid called R2-D2 who flees the spaceship along with protocol droid C-3PO.

On his home-world of Tatooine — where he lives with his Uncle Owen and Aunt Beru — Luke Skywalker crosses paths with the two droids. Upon fixing the latter, Luke discovers a hidden message from Princess Leia, asking for Obi-Wan Kenobi’s help. Luke believes this might be the mysterious Ben Kenobi that lives out in the desert and sets out to find him. Obi-Wan reveals himself to be a Jedi Knight — an old protector of the galaxy and user of the Force — after saving Luke from a Tusken Raider attack.

The two join forces in an effort to fulfill Leia’s wishes to deliver the Death Star schematics to Alderaan after Luke discovers his Uncle and Aunt have been killed by stormtroopers. Obi-Wan offers to teach him the ways of the Force. They hire the smuggler Han Solo and his companion Chewbacca to pilot a ship — the Millennium Falcon — to the planet Alderaan just as Imperial forces begin to flood the Tatooine spaceport of Mos Eisley.

Later, they are ensnared by the Imperial space station — the Death Star — where they disguise themselves as stormtroopers to free the imprisoned Princess Leia. In order for the team to successfully escape, Kenobi duels Darth Vader, sacrificing himself.

After saving Leia from Vader’s and Grand Moff Tarkin’s clutches, the group travel to the hidden Rebel base on the moon Yavin IV, where they use the schematics to locate a weakness in the Death Star. Mounting an attack mission on the Imperial base, Luke joins a Rebel squadron to fight against Vader’s army. Han — who left after reaping his reward for saving Leia — returns to help. Guided by the voice of Obi-Wan, Luke uses the Force to aim his proton torpedoes into the Death Star exhaust port, destroying the base before it can obliterate the Rebel base.

Luke, Han, and Chewbacca all receive medals for their heroic efforts in the mission.

A New Hope begins with text on the screen saying — “A long time ago in a galaxy far, far away…”. John William’s iconic overture plays as the opening crawl — the summary of events prior to the film — roll up the screen before the camera drops down onto an Imperial Star Destroyer. The opening has been repeated across all of Star Wars movies, cementing itself as one of the franchise’s most iconic components.

Who wrote the script for Star Wars Episode IV?

George Lucas wrote the script for Star Wars. He began the process in 1973 and the second draft was completed in 1975 called Adventures of the Starkiller, Episode One: The Star Wars. The script was finished in March 1976.

How has technology impacted the Star Wars franchise throughout the years?

New technology has allowed the Star Wars franchise to improve on its audio and visual effects over the years. Substantial changes were first made with the Special Edition remaster in 1997, in commemoration of the twentieth anniversary of Star Wars. These were mostly visual effects updates that Lucasfilm could test in anticipation of the franchise’s upcoming prequel trilogy, which began in 1999 with Star Wars: Episode I – The Phantom Menace.

A famous technology update saw the addition of the Star Wars: Episode III – The Revenge of the Sith (2005) version of Anakin Skywalker — played by Hayden Christensen — at the end of Star Wars: Episode VI – Return of the Jedi (1983) who replaced Sebastian Shaw as the Force appearance of Luke’s father.

What have been the biggest changes to Star Wars Episode IV over time?

Arguably, the biggest and most controversial change that Lucasfilm made to A New Hope was altering the infamous shooting of bounty hunter Greedo at the hands of Han Solo. In the original movie Han clearly shoots first, but Lucas wanted to give Han more justification for killing Greedo and therefore altered the scene so that the bounty hunter shoots first.

Another change sees the addition of Jabba the Hutt (rendered in CGI) inserted into the Special Edition re-release of A New Hope. The scene was originally meant to be added in post-production, replacing the stand-in actor for Jabba with a stop-motion character, although due to budget it was cut.

Why have there been changes to Star Wars Episode IV over time?

The changes over the years have been made primarily due to the budget, time, and technology restrictions during the time of the movie’s original inception. Adding previously removed scenes has allowed Lucas to tell the story he wanted to tell initially, as well as include content from the prequel trilogy in order to enhance continuity and the overall viewing experience.

The Star Wars films have gone onto change the world, spawning an entertainment empire that began with the original trilogy, famous quotes like “Aren’t you a little short for a Stormtrooper?”, and even getting its own day — May The Forth AKA Star Wars Day.

The Star Wars story continues with the new animated series The Bad Batch on Disney+.

Who is your favorite character from A New Hope?

Comments Off on Star Wars Episode IV: A New Hope