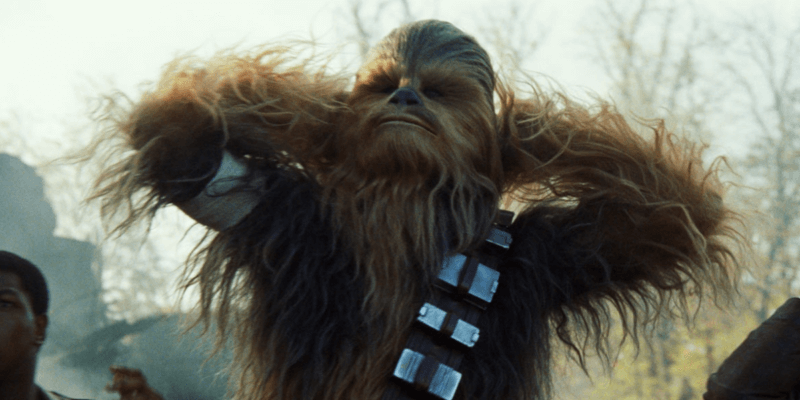 One of the many great things about Mark Hamill is that he’s obviously a Star Wars fan just like us. The actor who has been portraying the legendary Luke Skywalker since A New Hope in 1977, seems every bit as enthusiastic about the Star Wars universe today as he was “a long time ago in a galaxy far, far away.”

Most recently, Mark Hamill blew the minds of The Mandalorian fans when he appeared in a digitally de-aged form of Luke Skywalker to rescue pop icon Grogu. Today, he’s astonishing fans in a different way. Taking to Instagram, Hamill shared some images of the world-famous Wookiee, Chewbacca — with pants!

The images are early concept art created in response to studio notes received during the production of the original Star Wars: A New Hope. Apparently concerned that Chewie was too immodest for the sensibilities of movie-going audiences of the late 1970s, studio executives pitched the idea of Chewbacca in lederhosen. We can assume that most Star Wars fans have never thought of Chewie, physically portrayed by Peter Mayhew, as being nude, but now Hamill has seeded that thought in our minds, along with the idea of Chewie yodeling.

Mark Hamill shared a fun bit of Star Wars trivia along with the unusual images, writing from his Instagram handle @hamillhimself,

FUN FACT: Very early in the shooting of #SW studio execs expressed deep concern that Chewie didn’t wear any pants & suggested he wear a pair of lederhosen. That they would focus on this amidst all the grotesque elements in the script made us laugh (& a bit worried) #TrueStory

Mark Hamill is always good for some entertaining behind-the-scenes Star Wars facts, making his blue-checked social media accounts among one of the best follows in all of the fandom. Recently, he’s shared goofy, light-hearted takes on things related to Star Wars, like George Lucas wanting Daffy Duck to open Star Wars in theaters, adorable puppy reactions to Darth Vader, and assertions that the Force is real. Mark Hamill also treats his followers to more heart-warming fare like his reading to hospitalized children, or fond remembrances of working with the late Carrie Fisher as Luke SKywalker and Leia Organa.

What do you think of Chewie in lederhosen? Did George Lucas make the right call by “dropping” the pants? Let us know in the comments!

Comments Off on Mark Hamill: Studio Was Concerned About Pants-less Chewie in ‘Star Wars’