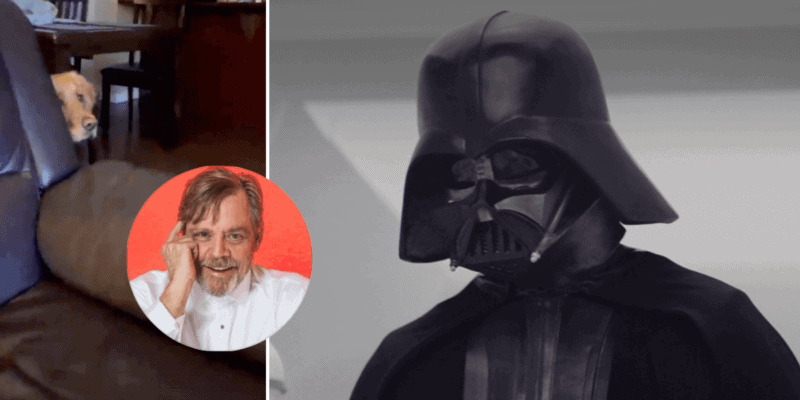 It’s commonly known that Mark Hamill loves dogs. From praising a Husky for singing the Star Wars theme tune that John Williams made famous, to showing off his own dog, Molly, to sick children while raising support for Children’s Hospital LA with Make March Matter, Hamill has a certain affinity for the beloved animals.

It’s safe to say that Hamill is amongst those responsible for making the Star Wars franchise such a global phenomenon.

However, while Hamill is inextricably linked to Star Wars, he has gone out to carve an illustrious career on both the big and small screen, such as lending his vocal talents to Batman: The Animated Series, playing The Joker — not to forget his humorous presence on social media. One of his most recent comedic takes came when he reacted to a viral TikTok video of a dog’s first reaction to seeing Darth Vader on screen.

The TikTok video comes from Ellie (@rustymetalcreation) which saw the Golden Retriever issue a deep growl and hide behind the couch during Darth Vader’s entrance in A New Hope. We can only wonder how the dog would have reacted seeing the events before Vader’s entrance in the original trilogy – which were shown in an iconic lightsaber sequence in Rogue One: A Star Wars Story (2016).

The video (which can be viewed here) went viral — because why wouldn’t a video showing a dog’s reactions to Darth Vader not go viral? – and has gone on to amass over four million views.

Well, it not only taken the internet by storm, but it also caught the eye of the Luke Skywalker actor. In response to the video, which was shared on Twitter, Mark Hamill Tweeted:

Smart dog. I only wish I’d thought of hiding behind the couch when I first met him.

Hamill is known for his often viral musings on social media, as well sharing behind-the-scenes photos and heartfelt memories, like his post honoring the late Carrie Fisher. Recently, he announced that a recent scientific discovery could potentially be the discovery of The Force. While also commenting on the height of a newborn giraffe, which comes in the wake of the Bigger Luke theory where Star Wars fans suggested there were not just one, but two Luke Skywalker’s in the original trilogy due to his height seems to change throughout the movies.

It’s also fun to see actors engage with the internet now as our lives are becoming more and more digitalized. Especially people like Hamill, who has garnered generation after generation of loyal fans due to his tenure in the Star Wars saga.

Hopefully, Hamill will continue to share his takes on the internet’s latest and greatest. And fingers crossed for his re-entry into the Star Wars universe at some point in the near future.

With the number of new films and television shows — like The Book of Boba Fett and Ahsoka — that Lucasfilm President Kathleen Kennedy announced at the end of last year, it is certainly only a matter of time.

When do you think Mark Hamill will return to the Star Wars universe?

Comments Off on Dog Freaks Out After Seeing Darth Vader, Mark Hamill Reacts