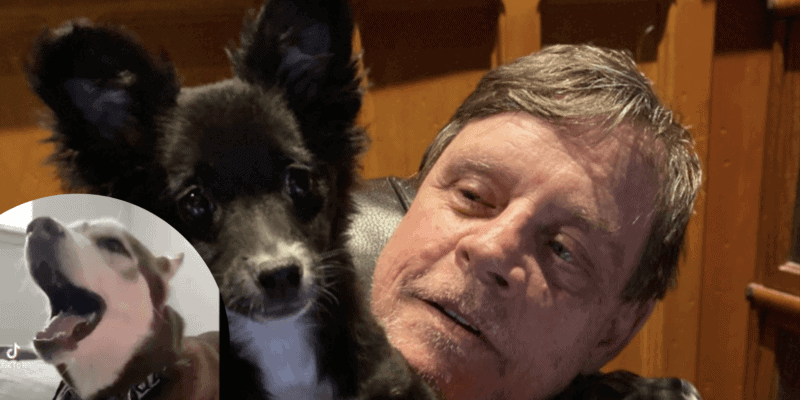 In the realm of words you never thought you’d read, a husky can sing the Star Wars theme song, and it’s taking the internet by storm.

Mya, the internet star of the moment, can perform John Williams’s iconic Star Wars theme and even Star Wars legend, Mark Hamill, is impressed. He shared the viral video of the canine Star Wars fan to his (very active) Twitter account with the enthusiastic caption:

So far, viral husky, Mya, has over two million views. The video of the adorable Siberian husky was originally shared by pet parent and TikTok user Ashlee (@ashlee_1128).

Say hello to the latest addition to the family. She’s the tiny (but fierce) ball of fur we call Molly Mae Hamill. With a very special thanks to #TobiesSmallDogRescue

Say hello to the latest addition to the family. She's the tiny (but fierce) ball of fur we call Molly Mae Hamill ❤️

Related: Fans Are Losing It Over Dorky Teenage Mark Hamill

What’s next for Mark Hamill and Billy Dee Williams?

Williams and Hamill first appeared alongside one another as Lando Calrissian — Han Solo’s (Harrison Ford) Bespin-based frenemy — and Jedi Knight Luke Skywalker in the second film of the Star Wars original trilogy, Star Wars: Episode V – The Empire Strikes Back (1980).

Most recently, a CGI version of Hamill during the Return of the Jedi era appeared in Jon Favreau and Dave Filoni’s The Mandalorian Season 2 finale episode.

Although Hamill had indicated he was done playing Skywalker following the sequels, he has since thanked Mandalorian director Peyton Reed and shared that he didn’t know he “needed” to pick up his lightsaber again. Hamill has not confirmed if he will ever again return to the Star Wars universe as the famous Jedi — and there is a chance the character could be recast with Sebastian Stan in the rumored Luke Skywalker spinoff series that would follow Skywalker’s adventures as Grogu’s (AKA Baby Yoda) Jedi Master.

As for Williams, he has hinted that he will be involved in the upcoming Disney+ Lando miniseries. Lucasfilm and Disney have not confirmed at this time, however.

What do you think about the singing husky and these Star Wars legends?