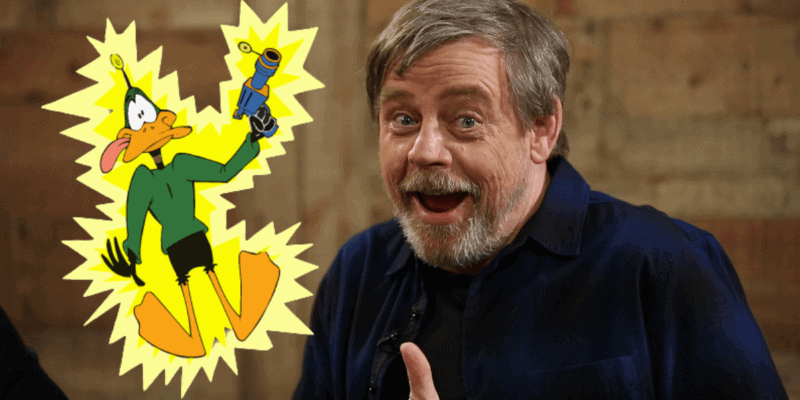 You can always count on Mark Hamill for some fun, unexpected insight into the Star Wars universe. The beloved actor who brought Luke Skywalker to life has been known to take to social media and offer fans behind the scenes scoops about The Mandalorian, remembrances of working with Carrie Fisher as Leia Organa, and other delightful Star Wars trivia, like this story about Harrison Ford filming a Han Solo scene.

Recently, Hamill revealed a connection between the original Star Wars release and a famous Daffy Duck cartoon. Clarifying a rumor, Hamill stated via his personal Twitter account that George Lucas wanted the Warner Bros. animated short Duck Dodgers in the 24 1/2th Century to play before each screening of the original Star Wars (1977) theatrical run.

Hamill’s Tweet explained that the rationale was that Lucas wanted the 1953 Merrie Melodies cartoon to act as an “…icebreaker to let the audience know what was coming was less than dead serious.”

Replying to a tweet from Toon In With Me (@ToonInWithMeTV), Hamill wrote in full:

George really did want this classic Daffy Duck cartoon shown before every screening of #SW. It would’ve been an icebreaker to let the audience know what was coming was less than dead serious. I was disappointed when we couldn’t get the rights to it & it didn’t happen. #TrueStory

George really did want this classic Daffy Duck cartoon shown before every screening of #SW. It would've been an icebreaker to let the audience know what was coming was less than dead serious. I was disappointed when we couldn't get the rights to it & it didn't happen. #TrueStory https://t.co/5VcGKH1yxf

In the Tweet, Hamill confirmed that he apparently agreed with George Lucas’s plan, expressing his disappointment that Star Wars producers were unable to get the rights to the space parody cartoon featuring Daffy Duck to open what has become the most iconic space opera of all time.

Presenting an animated short before the feature presentation wasn’t a new idea at the time — certainly it had been around since the Golden Age of animation. But, it was an approach to film programming that had fallen out of style by the time Star Wars: A New Hope came out in the late 1970s.

“Most people don’t understand the style of Star Wars. They don’t get that there’s an underlying motif that is very much like a 1930s Western or Saturday matinee serial.”

This throwback style gave Star Wars a very specific point-of-view and a recognizable tone. But, ultimately, Daffy Duck and Marvin the Martian were not able to contribute to that Saturday matinee vibe due to legal red tape.

Star Wars: Episode IV – A New Hope (1977) is available to stream on Disney+ along with the entirety of the Skywalker Saga.

Do you love Mark Hamill’s candid twitter presence? Why or why not? Let us know in the comments!