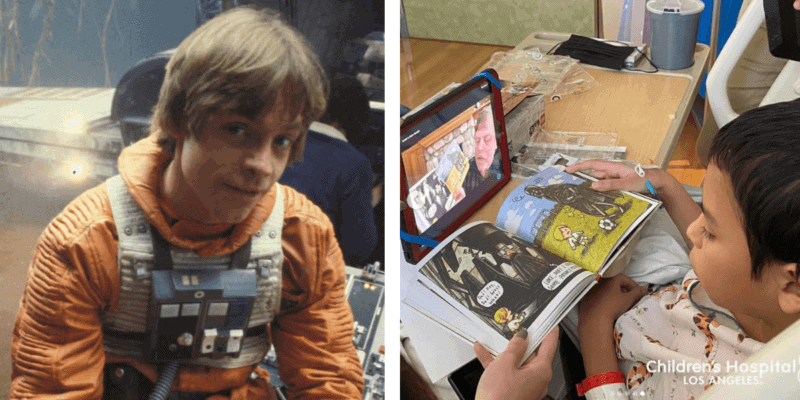 A Star Wars dream came true for the patients of Children’s Hospital Los Angeles when Luke Skywalker himself, actor Mark Hamill, joined them for Zoom calls. Sharing the extremely sweet videos to Instagram, Hamill read books, showed off his rescue dog, Molly, and was asked the difficult question of whether he would choose the Force or a lightsaber.

Mark Hamill is known for first bringing Luke Skywalker to the big screen in George Lucas’ Star Wars in 1977. The film franchise went on to become a phenomenon across the world, making stars of its cast, namely Hamill, Carrie Fisher (Princess Leia) and Harrison Ford (Han Solo). A prequel trilogy began in the late nineties with Star Wars: Episode I – The Phantom Menace (1999), and a couple of years ago, the Skywalker Saga was completed with Star Wars: Episode IX – The Rise of Skywalker (2019). Hamill came back for the sequel trilogy, going on to train Rey (Daisy Ridley) in the Jedi arts and duel with Kylo Ren (Adam Driver) on the planet Crait in Star Wars: Episode VIII – The Last Jedi.

Let’s check out what happened.

Sharing to his millions of followers, Hamill captioned the string of videos with:

“I never get tired of reminding folks just how short I am for a Stormtrooper. I also never get tired of visiting with the wonderful kids. When you’re in @ChildrensLA sometimes you miss your family & pets, so I thought Molly should make an appearance. This patient thought it would be fine to rename her “Bite-y” but I’m hoping she will outgrow it & don’t want to encourage her. Thanks to all the children on the mend for having me! @MakeMarchMatter”

The first video saw Hamill reading from Jeffrey Brown’s book, “Darth Vader and Son” which takes a humorous look at how Vader would have been as a father if he’d had an active role in raising Luke and Leia. Hamill comments back on the famous line — “Aren’t you a little short for a stormtrooper?”. He said:

“Here’s one that’s pretty funny “Aren’t you a little short for a Stormtrooper?” […] believe me I’ve been teased about that all my life.”

Hamill also chatted with another child, showing off his rescue dog, Molly, where he jokingly suggests he should have called her “Bite-y” due to the fact “she goes crazy, and starts gnawing on everything!”

In a conversation with youngster Nick about whether he would pick the Force or a lightsaber, Hamill’s answer went pretty deep. He answered:

“I think I would probably want the Force because it’s a spiritual and magical ability, and lightsabers are mostly for fighting. You know, I’d rather not fight if I don’t have to.”

Agreeing with him, Nick also said the Force, which prompted Hamill to add:

“Yeah because you can move things around with your mind, and do kind of magical things […] because the lightsaber, you know, the only time you can use it is when someone is attacking you, and who wants that? Nobody.”

Hamill discussed the book in another video. After asking the child whether he had seen Star Wars: Episode V – The Empire Strikes Back (1980), the actor explained:

“It takes a look at what if little Luke grew up with Darth Vader, and it’s kind of funny. And I hope you like it, maybe you could read some pages with me?”

Working with Make March Matter, an organization that helps businesses across Southern California come together to support Children’s Hospital Los Angeles and its mission to bring attention to the healthcare needs of kids, Hamill’s surprise Zoom calls with these hospitalized children undoubtedly for smiles on their faces. They thanked Mark by saying:

“If you could pick anyone in the world to read a book to you, we recommend Mark Hamill (@Hamillhimself)! From Darth Vader to Yoda to his very own Joker, he does it all. He even does a pretty good Luke Skywalker! Thanks, Mark (and Molly!), for helping Make March Matter and putting some smiles on these kids’ faces!”

It’s always a pleasure to see Mark Hamill using his Star Wars fame for good. We can only hope that he will come back to our screens soon. After that mind-blowing The Mandalorian Season 2 finale, where a young CGI Luke Skywalker came to take Grogu, and those Sebastian Stan (Winter Soldier) rumors, who knows what could happen in the future of the Star Wars universe.

Would you pick the Force or a lightsaber? Let us know! Buy your copy of “Darth Vader and Son” here for $13.95.