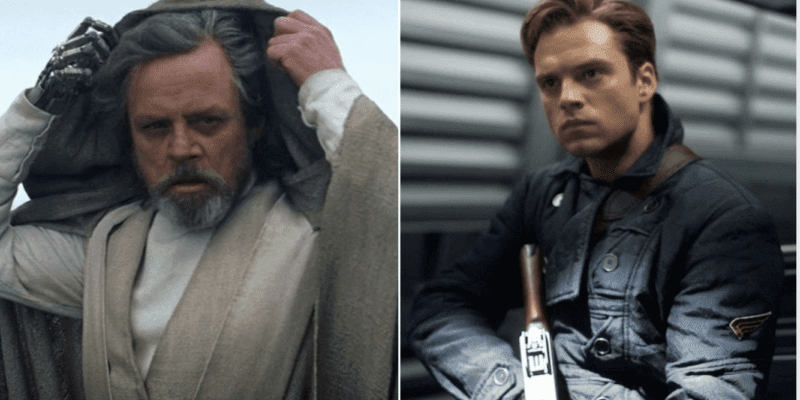 For months (and months) both Marvel and Star Wars fans have pointed out the uncanny resemblance between Bucky Barnes/Winter Soldier actor Sebastian Stan and young Mark Hamill.

Things came to a head when Skywalker was reintroduced to the Star Wars universe in Jon Favreau and Dave Filoni’s The Mandalorian Season 2 finale episode. The Jedi Knight rescued Grogu, Din Djarin (Pedro Pascal), and their companions from Moff Gideon (Giancarlo Esposito) and his Dark Trooper squadron.

Skywalker ultimately spirited Grogu away to complete his Jedi training, perfectly setting up the rumored Luke Skywalker Disney+ series. Reports indicate that — should this series come to fruition — it will be set after Star Wars: Episode VI – Return of the Jedi (1983).

This makes sense, since The Mandalorian takes place about five years post-ROTJ and, presumably, a Skywalker show would include Grogu — and, potentially, Luke’s Expanded Universe wife, Mara Jade.

Then, came the Stryder HD deep fake video in which fans got to actually see Sebastian Stan as the iconic Jedi for the first time.

Most recently, Stan himself finally spoke out about the rumors that he will be cast as a young Luke Skywalker. The Falcon and the Winter Soldier star told Good Morning America, “If @HamillHimself [Mark Hamill’s Twitter handle] calls me personally to tell me that he feels inclined to share this role with me then I’ll believe it.”

Hamill has an active social media presence and, true to form, has responded to Stan’s comments. He specifically replied to a fan comment about the casting rumors, writing “This assumes I have any say in casting decisions at Lucasfilm when in fact… I don’t.”

This assumes I have any say in casting decisions at Lucasfilm when in fact… I don't. https://t.co/7WNFTlm32H

While Hamill didn’t exactly shoot down the rumors that Stan will satiate the Star Wars fan community and play Jedi Master Skywalker in a future streaming Star Wars show, he certainly didn’t confirm them.

Hamill’s future with the Star Wars franchise is also unknown at this time, though he has expressed immense gratitude to Mandalorian director Peyton Reed for “the unexpected opportunity to revisit my character when he was still a symbol of hope & optimism. Your assured direction & kindness was a crucial element in the experience & means more to me than I can say.”

As for Sebastian Stan, the actor can currently be seen in the new Marvel Studios hit series, The Falcon and the Winter Soldier, every Friday on Disney+. He stars alongside Anthony Mackie (Sam Wilson/Falcon) in the show, written by Malcolm Spellman and directed by Kari Skogland.

Do you want to see Sebastian Stan play Luke Skywalker?

The Mandalorian saga will continue this December on Disney+ with The Book of Boba Fett. The Mandalorian Season 3 and two interconnected spinoffs, Ahsoka — starring Rosario Dawson as Ahsoka Tano — and Rangers of the New Republic are slated for 2022.