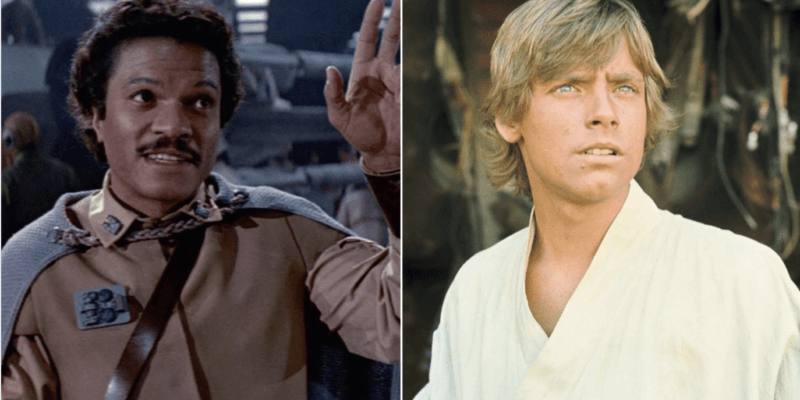 There has been a great deal of crossover between Star Wars and the Marvel Cinematic Universe. Actor Paul Bettany, for example, has been both Dryden Vos in Solo: A Star Wars Story (2018) and Vision in multiple MCU projects, including WandaVision. There are also rampant rumors that Iron Man trilogy and Avengers star Robert Downey Jr. could play Grand Admiral Thrawn in Jon Favreau and Dave Filoni’s The Mandalorian saga.

In this video [below], Star Wars and Marvel fans get to see what it would be like if Sebastian Stan (Winter Soldier/Bucky Barnes) and Anthony Mackie (Falcon/Sam Wilson) were portrayed by Hamill and Williams, respectively.

Perhaps the craziest thing about this particular video is that Star Wars fans have been calling for Stan to play a young Luke Skywalker for months. Here, we get to see just how uncanny the resemblance is between the Marvel actor and Hamill during the original trilogy years.

You guys voted and I create, this time I put Mark Hamill and Billy Dee Williams in The Falcon and the Winter Soldier as if they were back again in another universe kicking butt and taking names, as you guys voted for. I hope you all enjoy the fun concept and unite both Star Wars and Marvel fans together! If you do enjoy please like, comment and subscribe for much more content coming weekly!

At this time, rumors of a Luke Skywalker series featuring Sebastian Stan (and Grogu!) remain unconfirmed, but we do know we’ll be seeing more of Lando Calrissian in the near future.

Lucasfilm President Kathleen Kennedy confirmed a Lando miniseries for the Disney+ streaming platform at the 2020 Disney Investor Day event. At this time, it is not known if the Star Wars show will feature Billy Dee Williams, Donald Glover reprising his Solo role as young Lando — or, perhaps, both versions of Han Solo’s (Harrison Ford) best friend, er, frenemy.

As for Hamill, he most recently appeared as a CGI version of Return of the Jedi (1983)-era Luke Skywalker in The Mandalorian Season 2 finale. The Star Wars legend has expressed gratitude for the opportunity to wield his lightsaber once again but has not confirmed if he will return to his iconic role in the near future.

Due to this, it seems likely that Skywalker will ultimately return to the Star Wars universe at one point or another, if only to return “Baby Yoda” to Djarin.

There have also been rumors of a young Harrison Ford appearing in The Mandalorian universe in The Book of Boba Fett spinoff series. This cameo would, presumably, use the same deepfake technology that was used to insert Hamill into The Mandalorian. However, nothing has been confirmed at this time.

What do you think of this incredible Star Wars deepfake? Do you hope Lucasfilm continues using similar tech to cast Star Wars legends in new series?