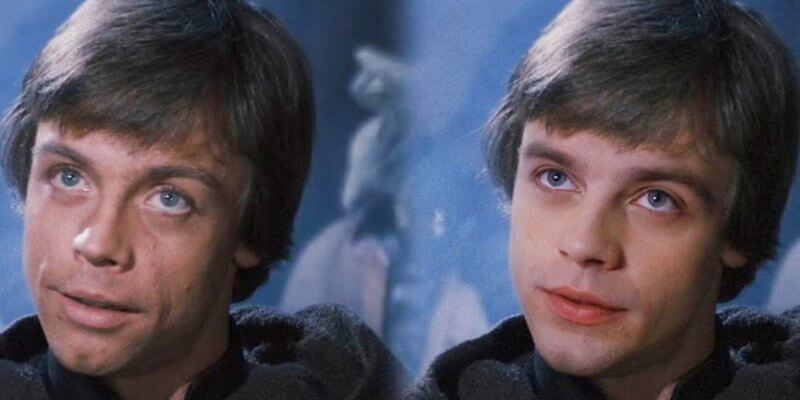 For months, both Marvel and Star Wars fans have pointed out the uncanny resemblance between Bucky Barnes/Winter Soldier actor Sebastian Stan and Luke Skywalker actor Mark Hamill during the original trilogy years.

Now, as rumors of a series about the iconic Jedi Master coming to Disney+ heat up, Stan has finally weighed in on the rumors that he will play a young Luke Skywalker. Good Morning America shared the following Tweet after an interview with Stan about his latest project, MCU show The Falcon and the Winter Soldier:

Sebastian Stan on rumors of him playing a young Luke Skywalker in #StarWars: “If @HamillHimself calls me personally to tell me that he feels inclined to share this role with me then I’ll believe it.”

Sebastian Stan on rumors of him playing a young Luke Skywalker in #StarWars: "If @HamillHimself calls me personally to tell me that he feels inclined to share this role with me then I'll believe it." ?https://t.co/i9rZzYvW4s pic.twitter.com/MvftVLlcLk

Rumors regarding the possibility of Stan playing Skywalker have gotten more intense ever since a CGI version of Hamill portrayed Skywalker in The Mandalorian Season 2 finale episode. The cameo was one of the most exciting moments in recent memory for the Star Wars fan community and most want showrunner Jon Favreau and Dave Filoni to bring the Jedi back.

Most recently, there were reports that the unconfirmed Luke Skywalker series had received a timeline — it would supposedly take place following Star Wars: Episode VI – Return of the Jedi (1983) in the Star Wars timeline.

This isn’t exactly surprising news for fans of The Mandalorian. The hit series takes place about five years after Return of the Jedi, so it serves to reason that Disney and Lucasfilm executives would want to continue capitalizing off of the popularity of Favreau and Filoni’s popular show as the Star Wars franchise continues to expand.

Having “Baby Yoda” appear in a Skywalker series is an excellent way to reintroduce him within the Star Wars universe — and, potentially, to finally make Skywalker’s Star Wars Expanded Universe wife, Mara Jade, part of the current Star Wars canon for the very first time.

What do you think? Will Stan end up playing Skywalker as the Star Wars story continues?

Catch Sebastian Stan as Bucky Barnes/Winter Soldier and Anthony Mackie as Sam Wilson/Falcon in Marvel Cinematic Universe series, The Falcon and the Winter Soldier, every Friday on Disney+.