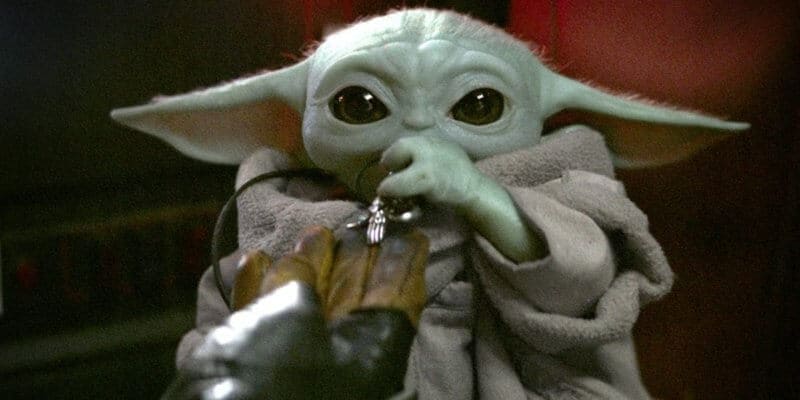 Djarin had “made a reputation for himself as a member of the Bounty Hunters’ Guild, collecting bounties as he traveled across the galaxy’s Outer Rim Territories—far from the authority of the New Republic.”

Just a few minutes into The Mandalorian’s series premiere, though, showrunner Jon Favreau and executive producer Dave Filoni changed the trajectory of the Star Wars universe when Grogu (then known as “The Asset,” “The Child,” or simply “Baby Yoda”) first graced television screens across America.

The adorable Force-sensitive foundling started off as nothing more than another bounty for Djarin but soon became so much more. Over the course of two seasons, Mandalorian fans have seen the duo go from reluctant companions on the Razor Crest to a true father and son who parted ways in the most poignant of scenes during The Mandalorian Season 2 finale episode (“Chapter 16: The Rescue”).

Djarin — a member of the Mandalorian cult The Children of the Watch — even removed his beskar helmet so “his” child could touch his face for the first time before departing with original trilogy Jedi Master Luke Skywalker (CGI Mark Hamill) to complete his Jedi training.

Grogu’s departure at the end of the second season, however, leaves questions moving forward into the upcoming season of the hit Star Wars series. Djarin, after all, has now completed his quest to deliver the infant Force user to the Jedi Order.

Furthermore, the bounty hunter is is now in possession of the Darksaber — which he won in battle with Moff Gideon (Giancarlo Esposito) — and is, therefore, de facto ruler of Mandalore, much to Bo-Katan Kryze’s (Katee Sackhoff) chagrin.

No matter how much Star Wars fans, and even non-Star Wars fans, love the adorable character, Grogu was noticeably missing in action — or, perhaps, missing during action is more apropos — throughout Season 2.

Frequently, when dangerous events took place, Grogu was safely situated far away from the fray. First, for example, he was left with Frog Lady and her husband on Trask when Djarin assisted Kryze and her Nite Owl warriors in “Chapter 11: The Heiress.”

Then in “Chapter 12: The Siege,” he was left in the care of a Nevarro schoolteacher droid when Djarin went to investigate the Imperial base with Greef Karga (Carl Weathers) and Cara Dune (Gina Carano).

Finally, in “Chapter 14: The Tragedy,” Grogu was sadly kidnapped by Gideon’s Dark Trooper squadron and didn’t resurface until the season finale, which means he was gone for all of the space pirate action with Migs Mayfeld (Bill Burr) in “Chapter 15: The Believer.”

As Inverse pointed out:

The Mandalorian is still an action-adventure series, which means that unless Baby Yoda has a massive growth spurt or starts using Jedi mind-tricks to help Mando track down bounties, the show was stuck with a limited number of plots. In real life, people with babies tend to quit doing whatever complicated or child-averse professional work they’re in.

Their report continued with this assessment:

If The Mandalorian Season 3 does manage to avoid bringing back Baby Yoda (at least for a little while) then suddenly, the show could take-off in an exciting new direction. In Seasons 1 and 2, Mando’s actions have been relegated to hiding, fighting, protecting, searching, and worrying. If Baby Yoda is out of the picture, he could actually do anything. This simple fact would allow the character of Mando to grow beyond being just the guy who takes care of Baby Yoda.

Essentially, leaving Grogu out of the picture in The Mandalorian Season 3 would free-up creator Jon Favreau and Filoni to explore all sorts of bold story arcs that might have been impossible with a 50-year-old infant in tow.

Even if this does happen, which is purely speculation at this point, it certainly doesn’t mean we won’t see Grogu again soon. After all, Djarin promised “the kid” he would see him again.

And, we know that Ahsoka, Rangers of the New Republic, and The Mandalorian Season 3 are set to air concurrently, culminating in some type of epic streaming event that possibly involves Grand Admiral Thrawn.

Furthermore, there’s yet another confirmed spinoff entitled The Book of Boba Fett and a rumored spinoff featuring Grogu and Luke Skywalker’s adventures, potentially with Mara Jade along for the ride.

If you can’t wait for the next new episode, you can always rewatch old favorites and catch Disney Gallery: The Mandalorian on Disney+ anytime.

What do you think? Where will Grogu show-up next? Do you think it’s a good idea for the third season of the Emmy-winning The Mandalorian series to air without him – at least at first?