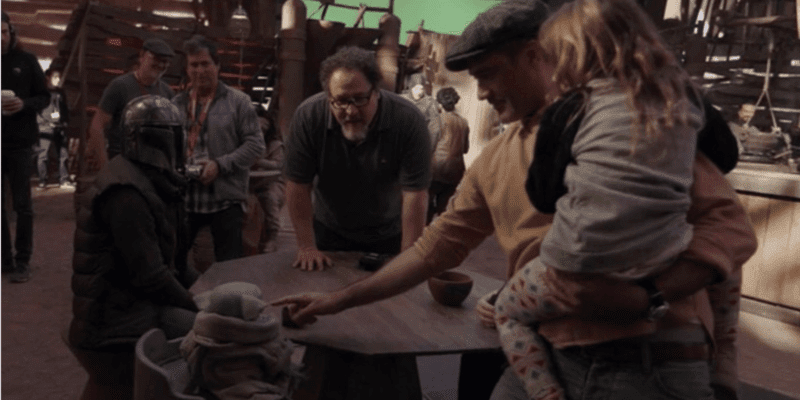 Mandalorian creator Jon Favreau — who got his start acting in and producing underground movies like Swingers before moving to Marvel’s Iron Man trilogy — unknowingly struck gold when he developed the idea for The Mandalorian — the tale of a lone bounty hunter and his tiny Force-sensitive foundling traversing the Star Wars galaxy looking for the vestiges of the Jedi Order.

When the first season of the hit Star Wars series introduced viewers to Mandalorian armor-clad bounty hunter Din Djarin (Pedro Pascal) and The Child/Baby Yoda — who we now know is an Order 66 survivor named Grogu — there was no way anyone could have known what a pop culture sensation it would become.

In seemingly no time at all, showrunner Favreau and executive producer Dave Filoni’s Disney+ original streaming show was 100 times more popular than the average American television series and Baby Yoda’s face was splashed across everything from ugly Christmas sweaters to cereal boxes.

When Season 1 ended with Taika Waititi’s episode (“Chapter 8: Redemption”), viewers were introduced to the Darksaber in live-action for the first time. Fans of the animated series Star Wars: The Clone Wars and Star Wars Rebels were already familiar with the ancient Mandalorian weapon, now wielded by Moff Gideon (Giancarlo Esposito).

The Mandalorian Season 2 not only brought back the Darksaber, but brought several fan-favorite animated Star Wars characters to life for the first time. Rosario Dawson portrayed Jedi Ahsoka Tano to rave reviews and voice actress Katee Sackhoff got the chance to play Bo-Katan Kryze in live-action.

Now, as we look ahead to The Mandalorian Season 3 and its three confirmed spinoff series — Ahsoka, Rangers of the New Republic, and The Book of Boba Fett — Favreau and Filoni have a lot more stories to tell in their ever-expanding corner of the Star Wars franchise.

Recently, Favreau shared details about his Mandalorian creative process with The Writer’s Guild of America.

When asked how The Mandalorian exists within the “sweet spot” of epic storytelling and high-tech visual effects, Favreau was quick to pay tribute to Star Wars creator, George Lucas:

Writers are only limited by the imaginations of their readers, but when you’re presenting it for the screen, you have to work your way through the interface of the screen. I’m very fortunate to be following in the footsteps of George Lucas, who found a really magical balance between those two elements and was able to evoke something that felt very archetypal in spite of the fact that it was cutting edge technology…

He also shared how he and Filoni, who are in “constant discussion” regarding how The Mandalorian fits into the overarching Star Wars timeline, are able to harness Lucas’s original ideas for the Star Wars franchise while simultaneously bringing entirely new tales and characters to life, as they did throughout the second season:

I’ve found, if you have a very good collaborator…even though I was actually writing the episodes, there were many, many hours of conversations, and I would show him [Filoni] things I was writing, and he was giving me a tremendous amount of feedback and helping guide me through the world of Star Wars. He had studied under George for I think a decade working on the animated shows [Rebels and Clone Wars], so I felt like I had a direct connection to the source code of this whole world with him.

Favreau also talked about how The Mandalorian will move forward into Season 3 and teased a bit of what fans can expect to “transpire”:

The Mandalorian inherits a great deal from existing Star Wars stories, and when I write, that context is always a consideration. It became clear that, within the established continuity, certain things were likely to transpire.

Filoni’s experience, of course, had made it easy for certain animated storylines and characters, such as both Tano and Kryze, to fit into The Mandalorian saga. Moving into Season 3, there are certain arcs that are expected to continue.

Grand Admiral Thrawn, for example, is likely to be the main villain in Ahsoka — and possibly in the entire interconnected Mandalorian universe — after being reintroduced in The Mandalorian Season 2, Episode 5 (“Chapter 13: The Jedi”) when Tano fought Corvus Magistrate Morgan Elsbeth (Diana Lee Inosanto).

Futhermore, rumors abound that other animated characters, including Clone Wars’ Captain Rex and Rebels‘ Sabine Wren, will make their way into The Mandalorian Season 3.

Favreau’s assertion that “certain things were likely to happen” indicates that he, Filoni, and the rest of the Mandalorian creative team are already well aware of what the Star Wars fan community expects to occur moving forward.

But, as we all know, the duo is sure to still have some surprises up their sleeves as well, no matter how well they’ve set up certain scenarios to play into other things that have already happened within the Star Wars universe.

At this time, The Mandalorian Season 3, Ahsoka, and Rangers of the New Republic are not on Disney’s 2021 release schedule. The Book of Boba Fett will premiere in December 2021. Which Star Wars series are you most excited for — more of our favorite titular Mandalorian in the new season or a spinoff?