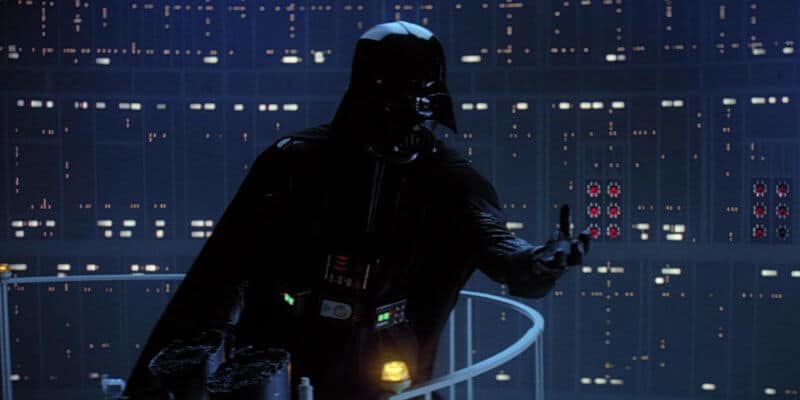 Darth Vader is undoubtedly one of the most popular characters in the entire Star Wars franchise. Introduced in George Lucas’s original Star Wars movie, A New Hope (1977), the story of the fallen Jedi Knight Anakin Skywalker and his descent to the dark side of the Force has captivated audiences for over 40 years.

Now, a forgotten script belonging to the original Darth Vader actor David Prowse has surfaced ahead of a Star Wars memorabilia auction featuring the late actor’s possessions. Prowse passed away last year while battling both dementia and COVID-19.

The auction, slated to take place on May 4, 2021 — Star Wars Day — includes a wide variety of items, including the aforementioned long-lost script. CNN shared details about why this particular Darth Vader script matters so much:

…actor James Earl Jones who provided the character’s voice — and who delivered one of Vader’s most famous lines to Luke Skywalker, telling the young Jedi: “I am your father.”

However, the script provided to Prowse omits this key revelation and shows different lines in its place.

“Luke, we will be the most powerful in the galaxy. You will have everything you could ever want… do not resist… it is our destiny,” the script given to Prowse reads.

CNN also shared a quote from auctioneer Andy Stowe, who noted that the shocking revelation that Sith Lord Darth Vader and Luke Skywalker (Mark Hamill) were related was “top secret.”

Stowe said, “The only people that knew I think were about three or four members of the cast.”

Since it revealed what arguably remains the biggest secret in Star Wars history, Empire Strikes Back (1980) has gone on to become one of the most popular movies in the Skywalker Saga.

The fan-favorite Star Wars film celebrated its 40th anniversary last year and, although the Star Wars fandom wasn’t able to celebrate together the way they would have before the pandemic, there were exciting “Empire at 40” merchandise collections and even special drive-in movie theater showings of the film.

Star Wars: Episode V – The Empire Strikes Back is currently streaming — along with all nine films from the Star Wars prequel trilogy, original trilogy, and sequel trilogy — on Disney+. The official description of the movie reads:

Discover the conflict between good and evil in the electrifying Star Wars Episode V: The Empire Strikes Back. After the destruction of the Death Star, Imperial forces continue to pursue the Rebels. After the Rebellion’s defeat on the ice planet Hoth, Luke journeys to the planet Dagobah to train with Jedi Master Yoda, who has lived in hiding since the fall of the Republic. In an attempt to convert Luke to the dark side, Darth Vader lures young Skywalker into a trap in the Cloud City of Bespin.

In addition to Hamill as Luke Skywalker and Prowse/Jones as the Dark Lord himself, the movie stars Harrison Ford as Millennium Falcon pilot Han Solo, Billy Dee Williams as swaggering Cloud City administrator Lando Calrissian, and the late Carrie Fisher as the indomitable Princess Leia Organa.

Darth Vader is about to make his return to the Star Wars galaxy in the upcoming Obi-Wan Kenobi special event series, directed by Deborah Chow (The Mandalorian). Hayden Christensen will reprise his prequel trilogy role as the Sith Lord alongside Ewan McGregor as Obi-Wan Kenobi.

The series is set to take place about ten years after the battle on Mustafar in Star Wars: Episode III – Revenge of the Sith (2005). Lucasfilm President Kathleen Kennedy has promised fans the “rematch of the century”, so presumably, we’re in for another epic lightsaber battle when these iconic Star Wars characters return to the Star Wars fan base after a lengthy absence.

What do you think about this Star Wars secret hidden in a long-forgotten Darth Vader script?

If you are interested in learning more about the David Prowse Star Wars memorabilia auction, visit the official webpage for The Estate of David Prowse.