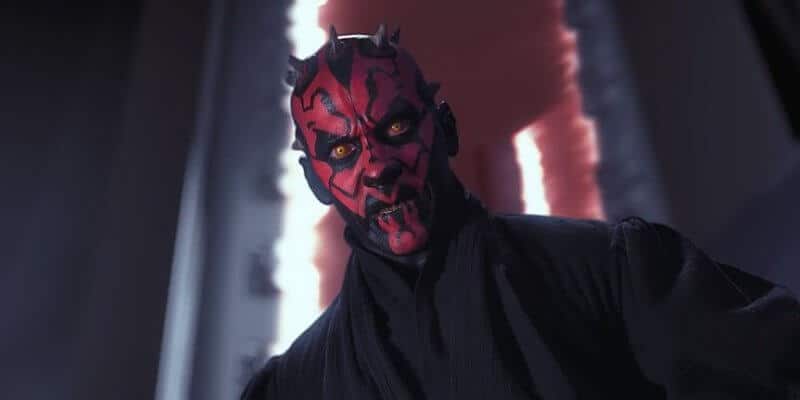 When Ray Park portrayed Darth Maul in George Lucas’s Star Wars: Episode I – The Phantom Menace (1999), he immediately made an impression on the Star Wars fan base.

Often known as simply “Maul,” the Dathomirian villain was trained by Darth Sidious/Emperor Palpatine and was absolutely deadly with a lightsaber, as Jedi Master Qui-Gon Jinn (Liam Neeson) tragically discovered in the prequel trilogy.

Obi-Wan Kenobi (Ewan McGregor) was Jinn’s Padawan and his death, as a matter of fact, set off the series of events that arguably led to Anakin Skywalker (Hayden Christensen) becoming Darth Vader. If Jinn hadn’t died, leaving Kenobi as Skywalker’s reluctant Jedi Master, there is — at least theoretically — a chance he wouldn’t have turned to the dark side.

Thus, Maul is more-or-less indirectly responsible for the rise of the Dark Lord. Now, with both McGregor and Christensen set to return in upcoming streaming show OBI-WAN KENOBI: An Original Series, it seems that we may also finally be getting more Maul in the Star Wars universe.

Yesterday, Ray Park shared a photo of Maul’s horns with the caption:

Meet me on Dathomir!

Tatooine is, of course, the Star Wars desert planet that is the homeworld of Luke Skywalker (Mark Hamill). It is also where OBI-WAN KENOBI is set to take place approximately 10 years after the events of Star Wars: Episode III – Revenge of the Sith (2005).

Although Park didn’t confirm anything about his appearance in the Deborah Chow series, there have long been rumors of the actor’s return to the Star Wars universe in multiple Disney+ projects. His most recent live-action cameo was in Solo: A Star Wars Story (2018).

One possible way Park could return to the Star Wars franchise would be in flashback sequence. It appears that actress Denise Gough has been cast as a live-action version of Duchess Satine Kryze in OBI-WAN KENOBI.

As Star Wars: The Clone Wars fans know, Maul killed Obi-Wan Kenobi’s lover in the animated series. If McGregor’s character recalls this unfortunate event, it is almost certain that Maul will appear.

At this time, Park’s somewhat cryptic Instagram post is all fans have to go off of, but it seems likely that we’ll see Maul’s return to the Star Wars galaxy sooner rather than later.

As the Star Wars universe continues to expand on Disney+, fans have a lot to look forward to, including 11 new Star Wars series over the next few years. Among these are the aforementioned KENOBI series and High Republic era show, The Acolyte, which may detail the rise of Darth Sidious’s Master, Darth Plagueis.

Some are also hoping at least one series will outline Maul’s backstory and, perhaps, include the live-action debut of Asajj Ventress.

Stay tuned to Inside the Magic for all of the latest Star Wars streaming news and sign-up for our newsletter below.