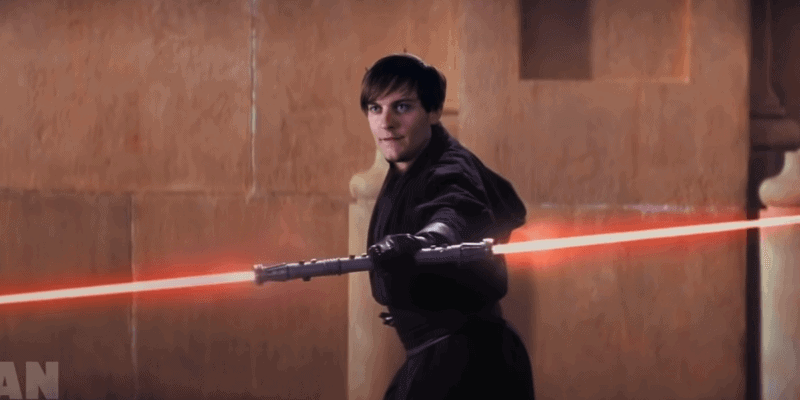 Sam Raimi’s Spider-Man trilogy has stood the test of time with Marvel fans. No matter who your favorite Spider-Man actor is — Tobey Maguire, Andrew Garfield, or Tom Holland — just about all fans can agree that Spider-Man (2002) and Spider-Man 2 (2004) are some of the best movies in Marvel’s library. Tobey Maguire’s portrayal of Spider-Man helped usher in newcomer superhero actors like Robert Downey, Jr. as Iron Man or Christain Bale as the Caped Crusader in Christopher Nolan’s Dark Knight and cemented them as cultural icons.

It’s been 13 years since Spider-Man 3 (2007) ‘s release — this was the least critically acclaimed of the films in the trilogy. Though the movie didn’t fare well with critics, fans continue to breathe fresh air into the movie’s reputation with memes. Perhaps the motherlode of all Marvel memes comes from Tobey Maguire’s transformation into “Bully Maguire,” a pseudonym for Peter Parker’s fall to the Dark Spider-Man suit.

No words describe the magic that occurs halfway through Spider-Man 3 after Peter Parker jumps into the black superhero suit and dances. You have to watch the video to understand what I mean:

The most famous line from the sequence is the now-iconic: “I’m gonna put some dirt in your eye.”

It doesn’t even make sense. Choosing those words out of all the phrases in the world shows you why “Bully Maguire” is a legend.

Searching “Bully Maguire” on YouTube pulls up numerous fan-made videos that superimpose Tobey Maguire into famous scenes from classic films, such as replacing Obi-Wan Kenobi in Star Wars: Episode III – Revenge of the Sith or Captain America in Avengers: Endgame.

Little details, such as Maguire flipping his hair and saying, “All you got?” right before pulling out Darth Maul’s saber, make it seem like Tobey Maguire was there on set. On top of that, the little quips Darth Maguire gives to Qui-Gon Jinn and Obi-Wan Kenobi perfectly match the intensity of the battle.

Obi-Wan Kenobi was edited to appear as falling and not catching himself after “Bully Maguire” gives a hearty kick in true trickery fashion. It’s a fact that no one, not even Thanos or Anakin Skywalker, can beat him. Kenobi was no exception.

While Marvel nor Disney have confirmed if Tobey Maguire will appear in Spider–Man 3 (2021), the actor is leading director Damian Chazelle’s latest project Babylon and it is set to star alongside Brad Pitt.

What do you think about this wild Darth Maul deepfake?