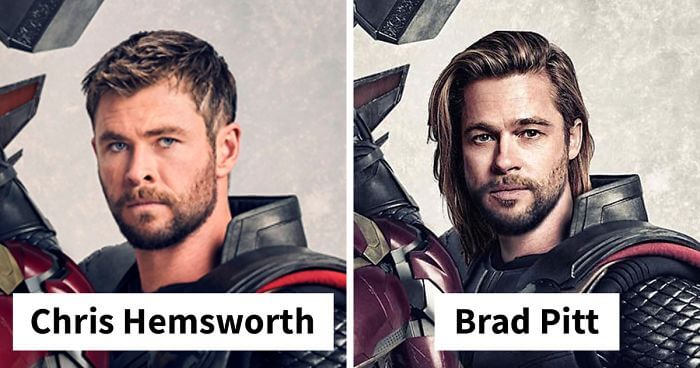 “Avengers: Endgame” is officially one of the biggest movies of all time and it’s in part thanks to the MCU’s many sequels, beginning in 2008, which lead up to the epic finale film. However, one artist wondered what “Avengers: Endgame” would have looked like if it came out in the 90s. As you can imagine, it might have featured an entirely different cast, which this creative visionary perfectly cast in this new set of digitally altered images!

As shared by Boredpanda, these images come from Digital artist “Mat” of houseofmat, who like many other visionaries, loves paying homage to the late and great Stan Lee and his many pieces of work.

In this first image (pictured below), we see some of the 90’s most prominent actors taking a few of the most beloved roles of the current MCU film stars. Denzel Washington as Black Panther, David Duchovny as The Hulk, Alicia Silverstone as Scarlet Witch, and Ben Stiller as Ant-Man.

Denzel Washington had many major hits in the 90s and early 2000s, including “Remember the Titans” and “The Hurricane.” The same goes for David Duchovny (“The X-Files”), Alicia Silverstone (“Clueless”) and Ben Stiller (“Zoolander”).

In this next image, Mat reimagined Iron Man as Tom Cruise, Eddie Murphy as Falcon and Brad Pitt as Thor.

These stars are still big hits today, but 90s fans might remember these actors from their lead roles in some of their bigger hits of the time, including “Doctor Dolittle” (Murphy), “Top Gun” (Cruise), and “Fight Club” (Pitt).

The 31-year-old told Bored Panda he’s been drawing since he was a kid, but he took a career detour in college before returning to art, “I studied Tourism and Hotel Management. I wanted to get back to the art side so I decided to study Graphic Design for a master’s degree.”

After obtaining his degree, through some self-exploration, the artist was finally able to find his creative niche. “I usually work on superheroes, comics, games, cartoon characters as a concept illustrator. My purpose is creating undone artworks to leave a footprint to the art world.”

Mat was born in 87 and says this series was inspired by his childhood, which he says included Iron Man as his favorite, “…he is a role model that [shows] a “human” can deal with other superheroes and villains. He’s got no superpowers. He has my complete respect.”

During the creative process of bringing these portraits to life, Mat used photoshop, illustrator, and tablet applications for drawing and editing. Reportedly, each piece took about four hours to complete with the longest taking about seven.

If you want to see more of Mat’s incredible pieces of work, be sure to follow him on Instagram at @houseofmat.

What are your thoughts on these pieces by Mat? Let us know in the comments below!

Comments Off on Artist imagines what “Avengers: Endgame” would have looked like if made in the 90s