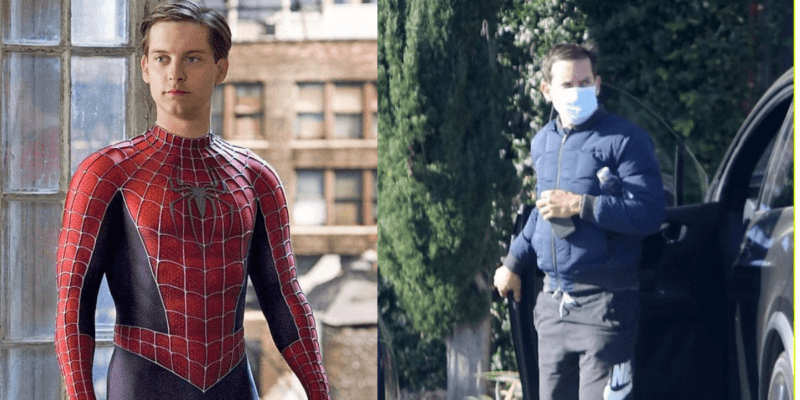 The Marvel fanbase is buzzing after Spider-Man 3 casting announcements nearly broke the internet yesterday. Now, actor Tobey Maguire is in the spotlight to see if he’ll join Andrew Garfield as Spider-Man in the upcoming Spider-Man 3 film. Maguire is best known for starring as the Peter Parker in Sam Raimi’s Spider-Man trilogy — and many Marvel fans are wondering if he will be suiting-up again sooner than we think.

Many rumors suggest that Maguire will join Andrew Garfield and Tom Holland as Spider-Man (Spider-Men?), but nothing has been confirmed by Marvel Studios just yet.

Earlier today, however, these rumors gained ground as a paparazzi shot shared by the official Just Jared Twitter account features Maguire arriving at a Wardrobe Workroom in North Hollywood, California. Maguire, presumably, came for a costume fitting, although the film was not specified.

Tobey Maguire was spotted arriving at a costume shop this morning amid the rumors of him joining the #SpiderMan3 cast – see the new photos! https://t.co/RLpNB4dH1z

This photo comes the day after Collider and IGN reported that both Andrew Garfield and Kirsten Dunst would join the Spider-Man 3 cast. Tom Holland, Jamie Foxx, Alfred Molina, Jimmy Kimmel, and Benedict Cumberbatch have already been confirmed for the upcoming Marvel film, but — in this writer’s opinion, anyway — there’s always room for another Spider-Man!

This photo and connections to Tobey Maguire joining the Spider-Man cast should be taken with a grain of salt. Reports suggest that Sony still needs to work out a contract with Maguire, as the actor is currently tied to an upcoming 2021 Damien Chazelle (La La Land, Whiplash) film titled Babylon.

However, this photo does align with current filming for Spider-Man 3 in Atlanta, Georgia. While California is nowhere near Georgia, Maguire may not be needed on set until a later date — or, maybe not even at all with new technology the Marvel team uses for the movie.

Nonetheless, Marvel fandoms are going crazy as too many stars align for a full-fledged ‘Spider-Verse’ and possible ‘Sinister Six’ appearance in Spider-Man 3. Until recent days, a reunion of the Spider-Men (and possibly Spider-Gwen?) lived on in the dreams of comic book nerds like myself. Still, this photo of Tobey Maguire arriving for a costume fitting could very well mean that the original Spider-Man is putting back on that suit.

While we’re still waiting on Marvel confirmation related to Maguire’s addition, let’s hope the actor is ready to star in another superhero movie!

Do you think Tobey Maguire will star in ‘Spider-Man 3’? Let us know in the comments below!